The Council of Licenced Firearms Owners says that broad definitions in the proposed changes to gun laws will make 250,000 New Zealanders criminals. 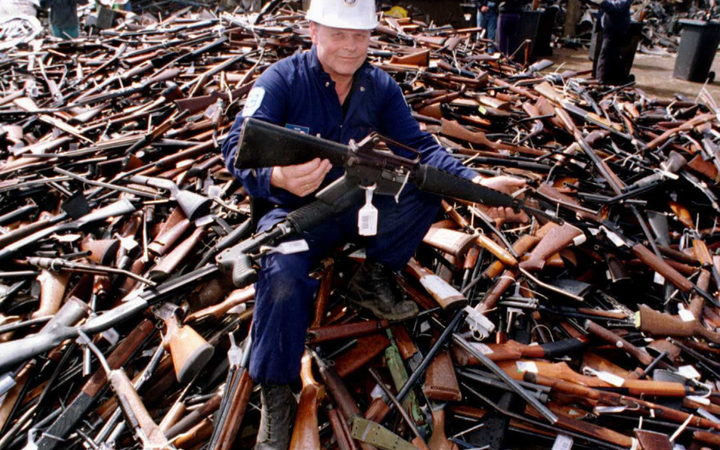 Guns handed in for scrapping in Australia. Photo: AFP

The Council of Licenced Firearms Owners began polling its members when the intention to ban military-style semi-automatic weapons was announced in the wake of the Christchurch mosque attacks.

It received 5,500 responses in 31 hours - the vast majority opposing the changes.

Firearm retailer Gun City has also urged its customers to sign a petition asking Parliament to give more consultation on the ban.

The council's secretary, Nicole McKee, told Morning Report the group was very concerned about the proposed changes and said all firearm owners will be affected.

"This is so widely encompassing, this piece of legislation, this actually goes further in the scope of the ordering council. There is quite a few upset people out there."

Although the legislation is intended to prohibit parts only for use with, or used to convert weapons into, military-style semi-automatics or assault rifles, she said the definition is too broad.

"The way that this has been worded, because it's been rushed through without the forethought of what the implications are of its wording, it actually does more than that. It does have the unintended consequences that we were afraid of.

"If this wording continues the way that it is, from the 12th of April the 250,000 law-abiding, upstanding New Zealand citizens will be made criminals."

Ms McKee said she would support effective legislation and there are some good parts to what's being proposed.

"We're going to prepare our submission, we're going to give advice to our community on what they need to submit, and we're going to encourage as many people as possible to get their voices heard. The democratic process in New Zealand should run, it should run effectively.

"She's got time to make submissions on this law before it's passed," he told Morning Report.

"The second thing is, she doesn't understand what amnesty means. They've got all the way to September to look at the law and hand in weapons that will be illegal and defined as illegal under that law, and be fully compensated for that. And it won't cost billions."

Mr Peters said he can't say how much it will cost, because they're unsure of how many automatic weapons are out there.

"If we go by the Australian experience, and we should not be too far removed from theirs, there's an upper limit and there's a lower limit and it's better to prepare for the worst."

"We've been pretty lax about this - we've been slack about it - and all of a sudden, a day of reckoning has come and we've got to act, as we should have done a long time ago.

He said what happened in Australia should have "been a signal to us" to act then.

Stuart Nash agreed that the unclear cost of the buyback only demonstrates the need for change.

"The fact that we have no clear view of what it will cost shows we have absolutely no idea how many weapons are out there, and it's one of the failings of the system at this point in time," he told Morning Report.

He said Ms McKee's concerns are unwarranted and the bill is going through select committee to ensure law-abiding gun-owners are not affected unintentionally.

"What we do want to ban is anything that will turn a standard weapon into a military-style semi automatic or assault weapon.

"We're not criminalising people, we're giving people an opportunity to hand their weapons in and we've said that we'll buy their weapon off them. I think we're being as fair as we possible can," he said.

Mr Nash said indications were the buyback could cost around $200 million.