Reducing train speeds across a notorious rail bridge in Waikato where two children have died would send the wrong message to the community, a coroner says. 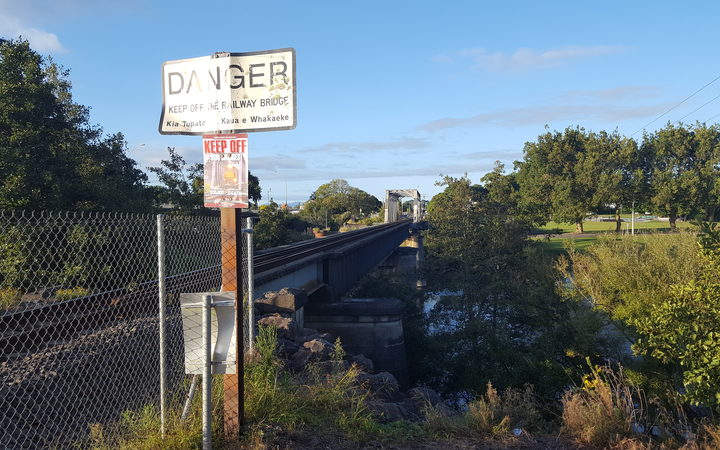 The danger signs at the rail bridge at Ngaruawahia. Photo: RNZ / Andrew McRae

Coroner Gordon Matenga has released his findings into the death of 11-year-old Moareen Rameka, who was hit by a train while she was playing on the bridge in Ngāruawāhia with a friend in March last year.

The first child to die on the bridge was nine-year-old Jayden Nerihana Tepu, who was hit by a train in 2002.

Trains are required to slow to 60 km/h through the town.

As soon as the train driver spotted Moareen on the bridge, he sounded the warning whistle and applied the emergency brake, but she couldn't outrun the train and was hit, the coroner's report said.

KiwiRail told the coroner it was concerned that reducing the speed limit further would lead children and others to believe they could outrun a train and that playing on the bridge was a safer activity.

Mr Matenga agreed with that.

"Moareen's death was preventable and the community is key to that prevention," he said.

"Everyone has a responsibility to care for and lookout for each other. The Ngāruawāhia community has acknowledged that responsibility and are taking encouraging steps towards sharing the message that playing on or otherwise encouraging the use of the railway bridge is risky behaviour and should be avoided."

Mr Matenga made no recommendations in his findings.

Waikato District councillor Janet Gibb said over the past 12 months, they had seen fewer people up on the rail bridge.

"People have said that when they've seen children near the rail bridge or any sort of dangerous activity near rail, road and water, the community is speaking up and saying 'oi, don't do this, you need to be more careful'."

Ms Gibb said the community had spent a lot of time thinking about ways to deter people from risky behaviour near the rail bridge.

They have been running education programmes in schools, which has included train drivers talking to children as well.

There have been other initiatives such as the Ngāruawāhia community board subsidising pool entry, to provide fun, safe alternatives to jumping into the river from the bridge, Ms Gibb said.

The council has also bought an inflatable obstacle course that's been set up at the pool and they have held open days with sausage sizzles and activities, which have proved popular, she said.

But Ms Gibb said children - and their parents - do need to take responsibility for their behaviour.

KiwiRail acting chief operations officer Henare Clarke said in the year since Moareen's death, its teams have worked closely with the local community on prevention and education programmes.

"This has included producing a video in te reo featuring Moareen's family, friends and teachers, which has been promoted by police and shown in local schools; sponsoring community patrols to keep people away from the rail bridge; community safety events and community meetings," he said.

"KiwiRail's priority is the safety of both the public and our people and we carefully considered the issue of how speed may affect safety on and around the bridge."

Mr Henare said when trains have travelled at slower speeds, drivers have watched children jumping on to them from the top of the bridge.

"We want to do everything we can to stop people entering the bridge, playing on the bridge or believing they can outrun a train if they hear a horn. Trains are big, fast and extremely difficult to stop. Our message is always that staying off the tracks is the only safe thing to do.

"About 35 large KiwiRail freight trains travel across the Ngāruawāhia bridge each day. It is one of the busiest parts of our freight network. We have worked closely with the Waikato District Council, police, iwi and community groups to promote safe behaviour and stop trespass and dangerous behaviour. Measures have included CCTV cameras, anti-climb fencing and anti-dig measures such as burying fencing underground."