An environmental activist has swum a giant "X" across a proposed seabed mining site 25km off the South Taranaki coast to mark it as a no-go area for commercial development. 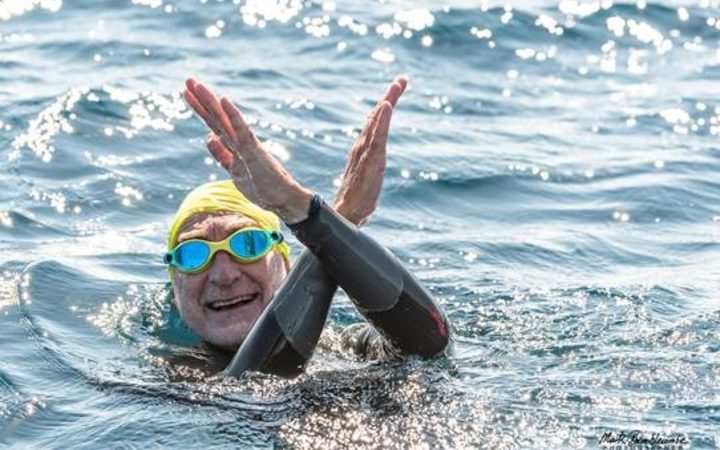 Athol Steward is more convinced than ever that mining the seabed off the South Taranaki seabed should not be allowed. Photo: Supplied

And to drive his message home Athol Steward is taking to the Tasman Sea again today to tackle a 20km ocean swim from Pātea to Kai Iwi Beach north of Whanganui.

Mr Steward, who will be joined on the coastal swim by his son, Lloyd, said that the stretch of coastline was directly in line with Trans Tasman Resources' proposed iron sand mining operation.

"It's also the stretch of ocean that will potentially be quite severely damaged by the effects of mining the seabed and dumping many millions of tonnes of seafloor back into the ocean."

A clinical director at Whanganui Hospital, Mr Steward swam the "X" over the top of the proposed mining site on 16 March, but had kept quiet about it in the wake of the Christchurch terror attack. 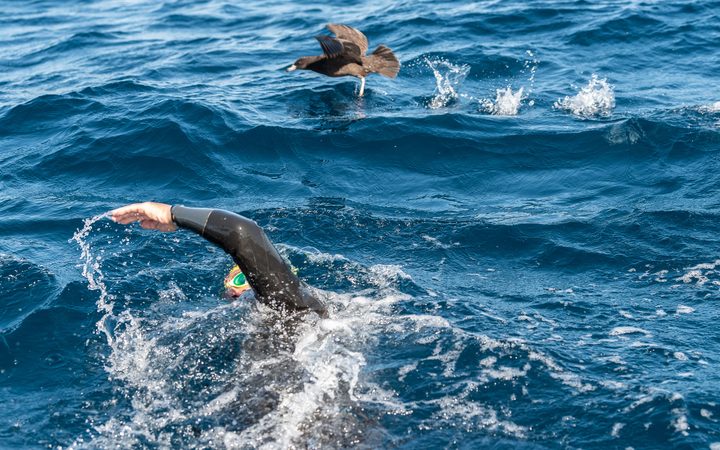 He said the offshore swim had reinforced to him why the area should be protected.

"In the process of doing the swim I realised we are blessed with a pristine beautifully abundant ocean in the South Taranaki Bight. There was life in the ocean and life above the ocean.

"There were beautiful birds, mollymawks and sooty shearwaters and in the water I was visited by kingfish. The plankton was actually visible in this crystal clear indigo blue water. It was just alive with life and it was just a privilege to be swimming in the ocean."

Mr Steward travelled to the proposed mine site by boat with a two-person support crew. He said just as he completed the "X" the group had some unexpected visitors.

"Just as I was swimming back to the boat - and I think this is more than just coincidence - we were visited by a pod of dolphins that circled the boat. To me it felt like they were doing a victory roll and it was a very special touch."

Mr Steward said starting the coastal swim in Pātea was significant because the community had been very supportive of any campaign to stop seabed mining.

In 2007 Mr Steward and his son walked 400km from Raglan to Whanganui - stopping in Pātea along the way - to protest the seabed mining proposal.

He said it was important to keep the campaign alive to generate awareness of the wonderful marine environment off the coast of Taranaki and to support the legal team combating the Trans Tasman Resources' proposal.

Trans Tasman Resources has said environmental concerns about the project could be managed and that it would create 300 jobs and add $160m to New Zealand's GDP.

In 2017 the Environmental Protection Authority granted permission for the company to go ahead with the mine, but the High Court revoked that decision in August last year.

The judge said the EPA's decision was inconsistent with the law.

He sent the decision back to the EPA "for reconsideration, applying the correct legal test in relation to the concept of adaptive management approach".

But in September 2018 Trans Tasman Resources filed a notice in the Court of Appeal.