The Transport Agency (NZTA) is under rising pressure to regulate e-scooter use. 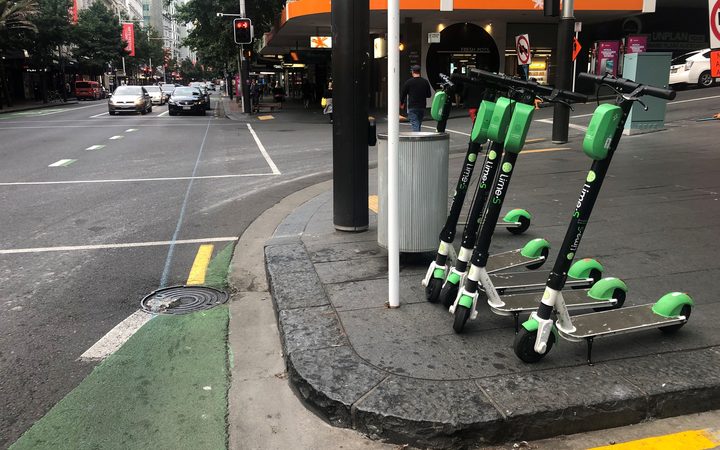 Lime e-scooters on the streets of Auckland. Photo: RNZ /SUPPLIED

It is being accused of breaching its statutory duties to assess whether the low-power scooters pose a risk on the roads and footpaths it regulates.

Some local councillors have said they're unhappy at NZTA pushing the job of regulation onto them.

A 2005 ruling that e-scooters are not motor vehicles has allowed them on footpaths and meant they are not subject to licensing, registration or warrant of fitness checks.

Thousands of e-scooters have appeared on the streets of Auckland, Lower Hutt, Christchurch and Dunedin. This has happened without NZTA doing a single risk assessment, two Official Information Act responses show.

Russell Bell, a former lecturer on risk at Massey University, said NZTA appeared not to have considered its statutory duties under the Health and Safety at Work Act.

He said there was legal precedent to treat roads and footpaths as a workplace and the agency had responsibility to assess the risks to anyone using them.

"The prudent organisation would go out and do an evaluation as to the impact on pedestrians."

Transport consultant Murray King disagreed that roads came under that Act, even though he believed they should, and the law itself should be tightened.

"I think that should be done because roads are an incredibly big part of the economy, and everywhere else in the economy is governed by this Act."

The Blind Foundation expressed dismay about a recent meeting with the NZTA acting chief executive Mark Ratcliffe, which it went to along with Living Streets Aotearoa and disability lobbyists.

Blind Foundation spokesperson Chris Orr said if there had been a risk assessment and public consultation, blind people would have had a say on potential risks scooters on footpaths posed.

Dunedin city councillors have voted to review a bylaw to help them control e-scooters but also called on NZTA to nationally administer aspects of their use, including compulsory helmets, speed limits and having a requirement to be used in cycleways.

Wellington councillor Brian Dawson said NZTA and other institutions needed to "step up and do the work" by ensuring there was informed decision-making. "At the moment we're kind of shooting in the dark."

In a statement, NZTA said it did not consider that the Health and Safety at Work Act applied to people using e-scooters, however it took safety seriously.

It says riders are covered by the Road User Rule that says they should behave in a careful and considerate manner. Those rules are enforced by the police.

The government will consider further regulations for the scooters after trials finished in Auckland, Dunedin and Christchurch.

Official Information Act responses show the NZTA has had two safety reports on e-scooters, one local, one from overseas that remains confidential.

The local one contains an eight-page safety analysis of e-bikes based on overseas research but only one paragraph on e-scooter safety.

It recommends some rules on scooter use, including tighter controls on footpaths than are in place.

Other than that, NZTA's only substantive research was done 15 years ago. RNZ has requested to see that research.

"Self-regulation is the worst, unfortunately, and the organisation you would expect to take a nationwide approach has failed to do so."

Mr Bell previously made a submission to Wellington City Council about e-scooters and said a risk assessment it was doing did not adequately address the its Health and Safety Act obligations.

Mr King said the legislative duties imposed on NZTA were weak when it came to local roads.

He said the Health and Safety at Work Act could be made "clearly applicable to roads and to public safety".

"Or an entirely new Act could be passed to cover roading obligations."

In the United States, the e-scooter rollout has been stalled in some cities by authorities belatedly issuing regulations and, in some cases, temporary bans after being caught out by the speed with which the scooter companies had launched.

An editorial in Investor's Business Daily asked why so many "progressive" US cities were banning e-scooters.