Hundreds more e-scooters will be on Auckland streets from tomorrow, but they will have tough speed limits in the city centre. 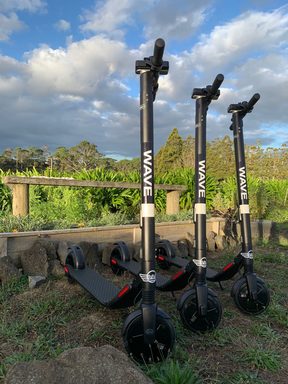 Wave scooters will be restricted to 15km/h on Queen Street and busy waterfront areas. Photo: Supplied

Wave will take part in the e-scooter trial, operating up to 500 scooters in a trial until 31 March.

Auckland Transport said the scooters will be restricted to 15km/h on Queen Street and in the Wynyard Quarter and Viaduct Basin areas. The e-scooters have a top speed of 25km/h.

"Wave has also assured us that its model of scooter, which is used in other countries, has had no reports of brakes locking, or any other known issues."

It will recall its fleet immediately if any malfunctions occur.

Each e-scooter will have a daily maintenance check when they are collected for charging.

Wave's e-scooters are licenced to operate between 5am and 1am each day.

Lime's e-scooters were suspended in Auckland and Dunedin after a braking glitch emerged with 30 people injured as a result, from around 150 incidents.

Last week they returned to Auckland streets after the council announced it and a third party consultant had inspected information from Lime showing the bug had been fixed, and Lime had checked the fleet.

Auckland Council chief operating officer Dean Kimpton said having a second operator as part of the trial would give the council the opportunity to see how different operators worked and help to inform any future decisions from the trial.

"Wave's licence and the council and AT's expectations around its operation are consistent with the conditions applied to Lime, including adherence to the code of practice," Mr Kimpton said.

Wave was granted a licence in December 2018. Initially there were three participants in the trial but one company chose not to participate.

Auckland Transport said there would be a 'three strikes' policy for riders breaching terms and conditions of the service. Wave will also host pop-up events, run an ambassador programme, and run a 'safe rider of the month' award for helmet use and safe riding. Auckland Council and Auckland Transport will collect usage and incident data.