The business case for light rail from Auckland Airport to the City Centre is being held up, as the transport minister considers an "alternative approach" to the funding and design of the proposed network. 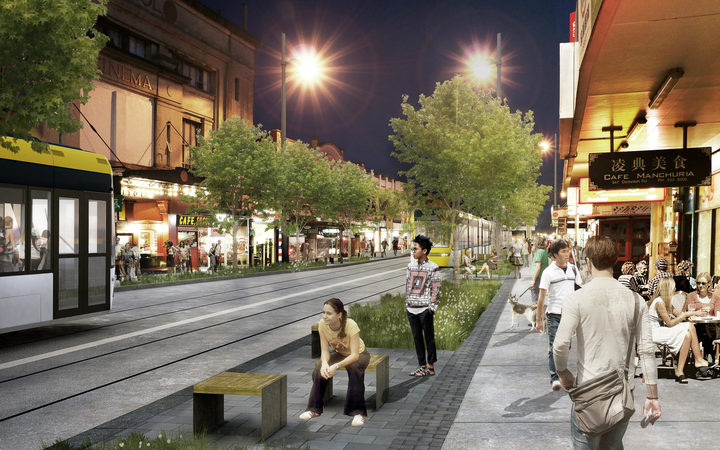 The government and Auckland Council released the details of its $30 billion transport plan in April last year, which included an initial $1.8b for a light rail network that would connect Queen Street with Dominion Road, Mount Roskill, Onehunga and Māngere.

NZTA was to have an indicative business case for light rail by December 2018, but a proposal from NZ Infra - a joint venture by the New Zealand Super Fund and the Canada Infrastructure Bank, CDPQ - for an "alternative approach" to the funding and design of the proposed network, has to be considered, NZTA said in a statement.

Transport Minister Phil Twyford said that he had received advice from the Ministry of Transport and Treasury about the alternative proposal earlier this month and is currently considering it.

A spokesperson for the minister said that there was no timeframe on this.

Auckland City Councillor Mike Lee said that the delay was extremely disappointing, but not surprising.

"What we need is a heavy rail connection to the airport and while delaying the light rail business case is perfectly understandable because it would be extremely hard to make this thing work, the delay is actually holding up the only viable alternative."

Jon Reeves of the Public Transport Users Association (PTUA), also doesn't think that is the reason there has been a delay.

"If the original business case actually stood out and stood up for itself, we would have seen it by now."

"I would probably think they're having some problems around costings of building it and trying to figure out where the route would go, basically the tram is going to be a very slow, very costly project and it is seriously going to be a waste of taxpayers money."

The PTUA has paired up with public transport lobby group NZ Transport 2050 [https://www.radionz.co.nz/news/national/368324/public-transport-groups-oppose-auckland-light-rail-plan to oppose light rail, and call for a business case investigation into heavy rail.

Mr Twyford's spokesperson said that light rail was still the only mode being considered.