Police are still searching for a greenstone mere artefact stolen from Auckland Museum earlier this month. 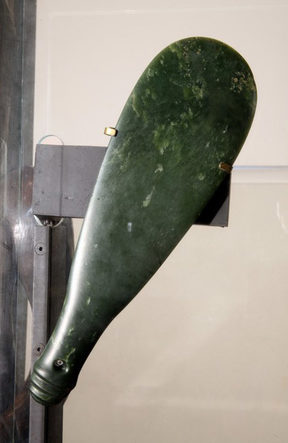 The 26-year-old man has been charged with theft, wilful damage and intentional damage and appeared in the Auckland District Court yesterday.

Auckland Museum Collections and Research Director David Reeves said the mere pounamu was taken on 6 March and has significant value.

"We are deeply shocked and saddened by the theft," he said.

"It's very difficult to provide a monetary value for such a taonga. But what I can say is that its cultural and historic significance is priceless."

Auckland City District Police said the mere was still missing and appealed to the public for information on its whereabouts.

The mere, named Pokaiwhenua, is from Ngāti Porou on the East Coast and has been part of its collection since 1897.

Mr Reeves said the museum had been in regular contact with the iwi over the theft and acknowledged the impact the theft will have on descendants.

"Auckland Museum takes its role as a kaitiaki of Auckland's collections extremely seriously, protecting and caring for an outstanding and significant collection of Māori treasures.

"We remain hopeful for the safe return of this precious taonga."