If Manar Ibrahim stumbled at all in her speech at yesterday's vigil in Christchurch, it's because the size of the crowd gave her a fright. 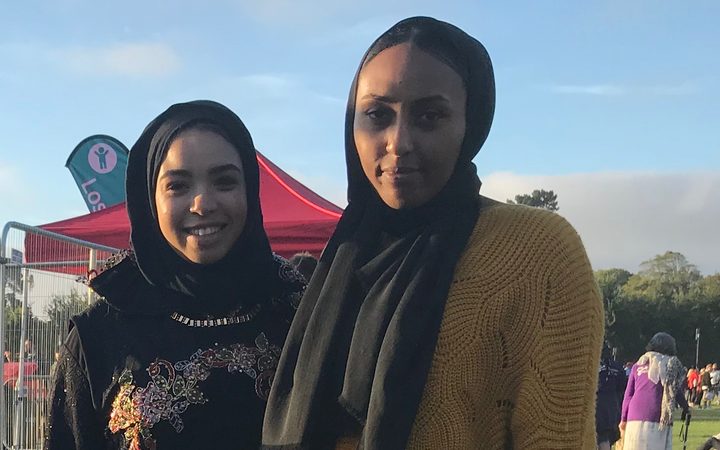 The event, organised by Scott Esdaile, was planned as a family friendly event where people could bring a picnic and show their support for the Muslim community.

People brought deck chairs and picnics, pets and bicycles. The mood was reflective and hopeful.

As people crowded into North Hagley park in the setting sun, surrounded by armed police and private security, Manar Ibrahim spoke about New Zealand becoming more united as a nation over the past week.

But she says there's more to be accomplished. "We never know when our time is, and so we should always be ready," she told the crowd.

"The ones that stand before me now, your purpose is still not accomplished and that is why your time is yet to come. Hopefully to all of New Zealand, it showed us humans are humans, no matter race or religion and to truly be accepting of others.

"In the middle I looked up and I got a fright," she told RNZ after the event. "I didn't know where to look.

"It is so reassuring to see all these people here today, coming together for the people that passed away. I've never been happier to say I am from New Zealand."

Her cousin, Noha Ibrahim, also a student at Canterbury University, said she felt the support from the people of Christchurch.

"Just the mere fact of them coming out on a Sunday afternoon, they could be doing other things, but for them to come out in these many thousands just to show their support. You just need to be here, not even to say or do anything but just to be there."

That support is one of the things getting the families of the attack's 50 victims through this moment, she said. "Knowing that things are changing and that people are standing strong together." 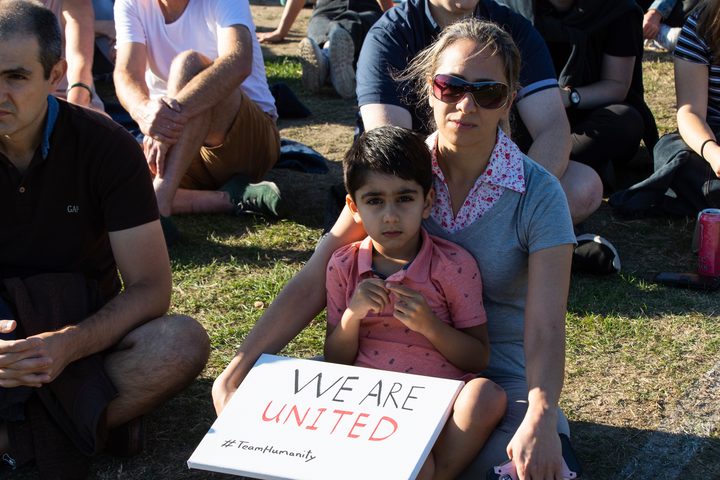 Ms Ibrahim said being in the audience was "surreal."

"I was in Egypt when it happened. I was just about to go to sleep because it was about 4am. I just didn't know what was actually going on.

"My first instinct was to call my dad, and my mum, because they always go, every single Friday without doubt, they always go [to the Al Noor Mosque]. So I called both of their phones and no one answered."

She eventually discovered her parents were safe. "But just to know and just to see all the events unfolding is something that I don't think I am believing at the moment. You never would have thought that this would happen."

On stage, Bazir Shah, the president of the University of Canterbury Muslim Student Association, asked the audience "where do we go from here?"

And he had a message to people who share an ideology with the attacker. "What are you guys afraid of? Are you afraid of diversity?

"We need to overcome this ideology by gaining knowledge. Through knowledge, we can eradicate ignorance. And once we have eradicated ignorance, we can truly, truly, not act foolishly in the future." 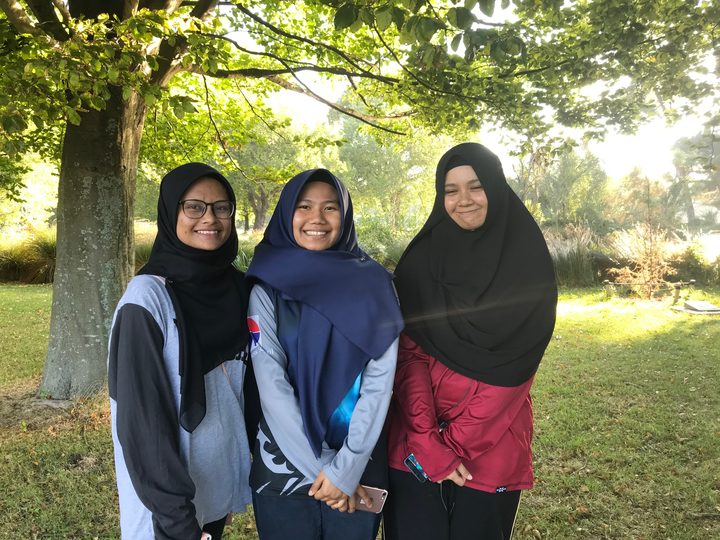 In the crowd was Adilah Ishak, who is studying accounting at the University of Canterbury. She too was overwhelmed by the numbers.

"Such a beautiful moment. I think [the Muslim community] feels stronger than before, because we have all the Kiwis behind us. All the support and all of the love."

Okirano Tilaia, the head boy of Cashmere High School, told the crowd they must redefine what it means to be a community, city and nation.

"When you see hatred, you say love. When you see anger, you say peace. For we do not let these horrific events define who we are."

"We can't go back and change the beginning. But we can start where we are and change the ending," he said, quoting C.S. Lewis. "Because the only thing stronger than hate, is love."

Evone Siufanga drove in from Rangiora because she wanted her kids to attend. "We heard that it's a prayer for the community, and we wanted to bring our children here to be a part of that and let them know that even though this tragedy happened, that people can still get together and support each other." 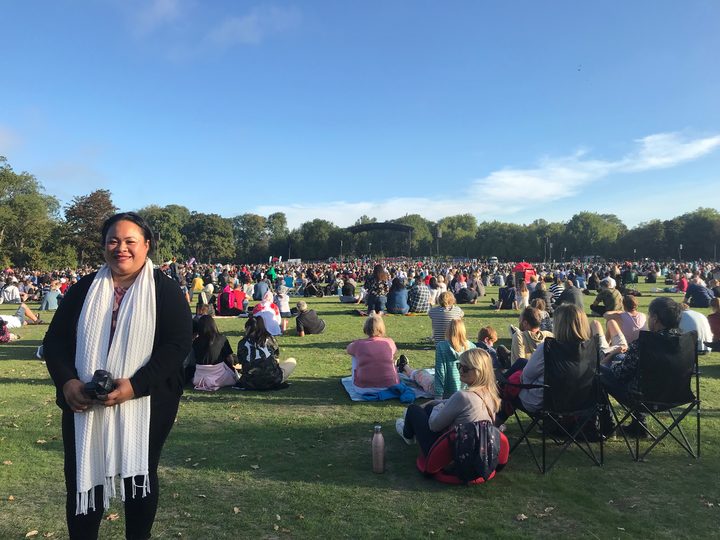 Evone Siufanga watched the performances from the back of the crowd. Photo: RNZ / Megan Whelan

One of her children experienced a lockdown at school on the day of the attacks, Ms Siufanga said. "So what we did is bring them here to let them know that what happened, you don't stop there. People move on and help each other. For them to come here really opened their eyes to that. To so much love."

For Manar Ibrahim, that's an important thing to remember. This one person, he broke us. Not just as Muslims, but as a nation, he truly broke us.

"And I can see the hurt in the eyes of New Zealanders. But yet he brought us all so much more together. And the 50 people that passed away, it's absolutely traumatic, and I don't even have enough words to say how sad it is.

"Yet, unfortunately they had to go to bring the rest of us together." 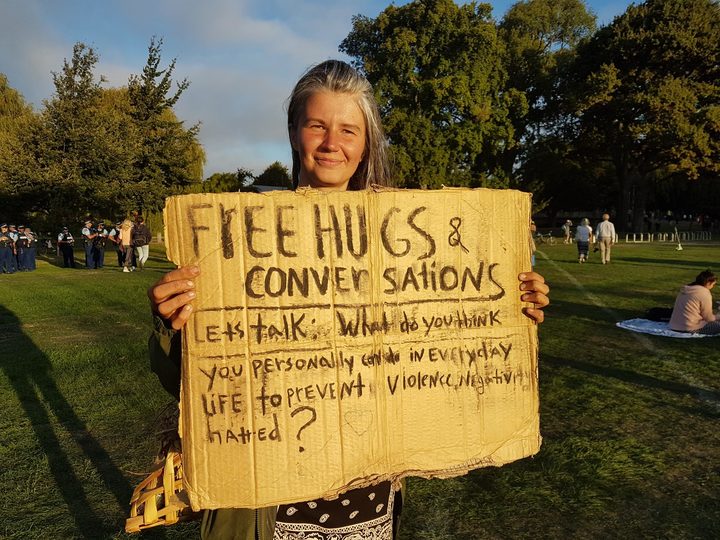 On stage, Sam Brosnahan, the president of the University of Canterbury Students' Association, challenged New Zealand.

"Imagine Aotearoa truly acting out what long-term support and solidarity looks like.

"Imagine Aotearoa listening to, befriending and following on social media people in our community that may not look like you or talk like you or express faith in the same way you do.

"The world has watched in wonder at how we've all responded," he said. "But the world is also watching what we do next.

"So let's show them the Aotearoa the world needs to see."

The support on display in Hagley Park is what the world needs to see, Manar Ibrahim said.

Shootings happen all over the world, she said. "And for the United States, sadly, that's become normal. "Whereas for us, just one made us change this much. I think that's what the world needs to see. That we are together."