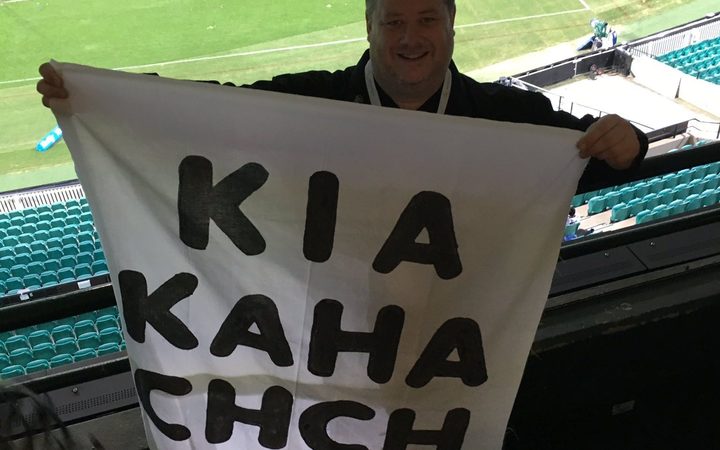 The banners were painted by the Sydney based All Blacks Supporters Club, and draped over an advertising hoarding. Photo: @ABSCSydney

The banners were briefly displayed at the Sydney Cricket Ground during the match between the Crusaders and the Waratahs.

The banners which said "Christchurch strong, love over hate" and "kia kaha Christchurch" were painted by the Sydney-based All Blacks Supporters Club, and draped over an advertising hoarding.

But the fans were asked to remove them by the SCG's security staff as they were larger than the ground's rule for banners.

So was just told by @SCGTrustMedia @scg to take down our banners of support for the victims of the CHCH Attack by SCG security.
Sometimes somethings are bigger than a game, this was one and you got it wrong @scg#WARvCRU #SuperRugby pic.twitter.com/wBZVYnLOHi

The club expressed disappointment at the SCG, tweeting: "some things are bigger than a game and you got it wrong".

Earlier, the SCG had tweeted a photo of the two teams standing together during a moment's silence with the words "we stand with New Zealand".

We stand with NZ #WARvCRU