Homeless man Shay Kenny and his cardboard sign have become an unusual symbol for Christchurch's healing, after Friday's attack. 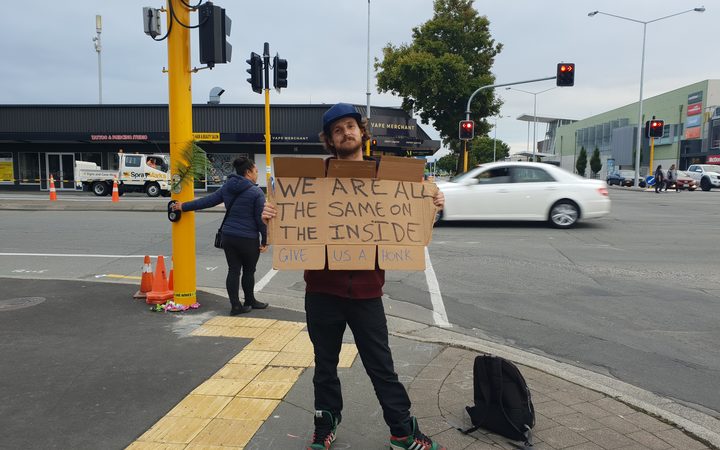 Shay Kenny vows to stand holding his sign for eight hours a day for at least the next week. Photo: RNZ / Katie Todd

He has vowed to stand on a street corner on the corner of Aldwins Road and Linwood Avenue, near Linwood mosque, for eight hours every day with a sign reading 'We are all the same on the inside'.

When Mr Kenny heard about the shootings he said he desperately wanted to help out anyone affected.

"But I had nothing to give except my time," he said.

"So I'm going to stand here until 10pm every night, hold this sign and get as many honks of support as I can."

He said his message is one of unity.

"We all breathe and bleed the same, the only difference is the colour of our skin and the way we think."

He only started on Sunday, but said the reaction from the general public has been overwhelming.

One Muslim man approached him and gave him $100, while another - a member of the Linwood mosque - stood with him and held one side of the signs for about two hours on Sunday.

Others are cheering, tooting and giving him food, drink, hi-fives and hugs.

Candy Mason, who bought Mr Kenny a coffee on Monday night, said his message resonated with her and inspired her to share the love back.

A drum and bass DJ who saw Mr Kenny standing on the corner, has also approached him to make a music video about him and his sign.

Mr Kenny said in the middle of a horrible time for Christchurch, he is thrilled that his positive message is travelling far and wide.

He said he will be there for at least the next week "just doing his bit."