Analysis - New Zealand has led the world before and has to again in the wake of the Christchurch terror attacks, writes Emma Beals. 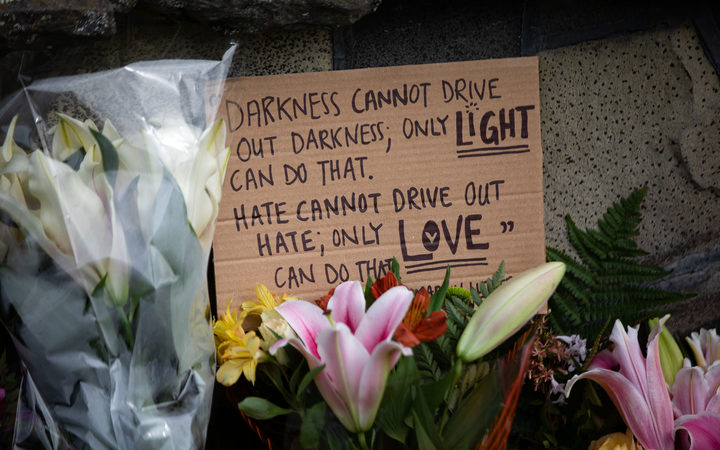 Many are expressing their support for the Muslim community in the aftermath of the mosque killings in Christchurch. Photo: RNZ

New Zealanders are in shock and disbelief. This doesn't happen in Aotearoa. This isn't who we are. We are united in grief.

Fifty of us have been killed. Each leaves a family, friends, and a community broken, mourning, and seeking answers.

The global Muslim community feels vulnerable. Jewish people worldwide are scared too. Each aware they have increasingly been targeted by an extremist white supremacist ideology.

We are also confused and afraid about what this means. There is little doubt we will be changed as people, and as a country, by what happened. We must remember that it isn't what happens to us that defines us, it is what we do next. How we come back from one of our darkest days is what will shape our country, our communities and potentially the world.

We have talked a lot since the attacks about who we are as New Zealanders.

Some of this comes from confronting the worst parts of ourselves. How could this happen here? We know, deep down, that our culture is permissive of casual racism. We have seen the influence of mainstreamed right-wing rhetoric creeping into our communities, our workplaces and families. We wonder whether this attack was somehow the sum of those parts.

We also remember that we were the first country to give women the vote, and our third female Prime Minister is getting on with the job in a time of crisis because it's not new or special that she's a woman, she is simply our leader. We remember that we are a nation that tore itself in two to protest apartheid in South Africa when it threatened to make some Kiwis feel lesser, and that we banned nuclear weapons from our waters even when larger countries attacked us for it.

We celebrate that we are a nation with overflowing te reo classes as we work together to keep taonga Māori alive and we take in refugees from around the world. We are comforted that our political spectrum doesn't have the extremes seen elsewhere because fairness is something we all believe in.

This attack happened here because of these values, not in spite of them. We may be fearful and angry, but the only way to fight back is to redouble our commitment to them; to who we are.

We don't win an ideological war by becoming more like those who wish to destroy us - regardless of whether it's white-supremacists or Islamic State. We win by showing why what we believe is better. Why it will always be better. We are stronger together. Our diversity is our strength. We believe in fairness and kindness, to each other and in our foreign policy. Our belief in human rights extends from the right to worship, to the right of the perpetrator to a fair trial in accordance with our laws.

I don't pretend this is easy. My own life was touched by the terrorism of IS five years ago. I know how hard the work ahead of us is. Some days, standing firm in your values while every cell of your body is trembling in fear, grief and rage, is the hardest thing in the world. But at times like this, it is the only work worth doing.

Because of who we are, our country and leadership have been quick to put words around this attack. Words that matter. Terrorism. Extremism. Compassion. Values.

A growing global problem with white-supremacist extremism has been called out for what it is. Acknowledging this problem is a long overdue step in beginning to combat it.

Rather than questioning how we must change, we are focusing on our compassion and concern for the victims and their community, on unity between political leaders, commitment to diversity, kindness, justice, peace and safety. Standing firm in these values is the first step in ensuring this attack does not compromise them.

The world needs leadership on these issues. We have led before. In the worst imaginable way, we have been chosen to do so once again.

Today, we mourn the lives of the victims, alongside their families. We mourn our innocence as a nation.

Tomorrow, we show the world that our compassion is not weakness. We are kind, but we are unbreakable. This, is who we are.

* Emma Beals is an award-winning independent journalist who has focused on the conflicts in Syria and Iraq and the rise of ISIS since 2012.