A conservation group is trialling the use of drones, battery-powered self-priming traps and infrared cameras ahead of a 1080 drop in Egmont National Park. 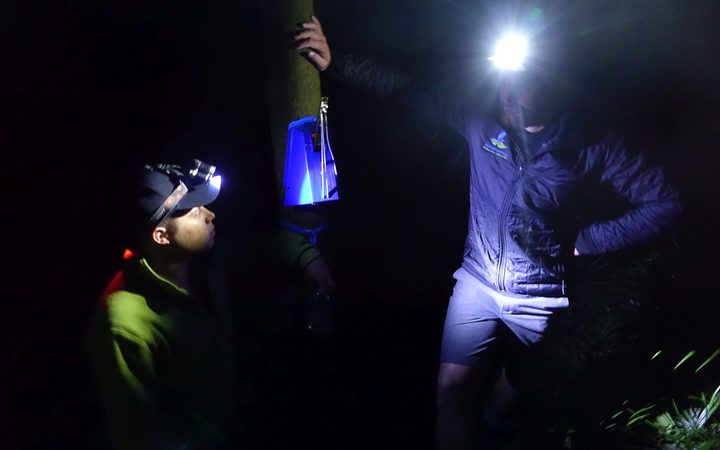 The Taranaki Mounga project wants to eradicate possums on the Kaitake Range and hopes the devices will help keep pest numbers down after the poison is dropped.

The project is a partnership between the Department of Conservation, the eight Taranaki iwi and the Next Foundation. Set up in 2015 with a kitty of $24 million, it aims to get on top of pest numbers in the national park over the next 20 years and restore bird life to its forests.

To achieve this it plans to surround the mounga in a virtual halo of trapping devices with the help other environmental groups, including the Towards a Predator Free Taranaki 2050 initiative which itself has funding of $11.5m.

A dawn visit to a trap line on the Kaitake Ranges illustrates perfectly the challenge Taranaki Mounga faces: the silencing is deafening. Where there should be a dawn chorus of tūi, kōkako and kākā there is virtually nothing.

Project manager Sean Zieltjes said it should not be this way, but more like at Rotokare Scenic Reserve in central Taranaki, which is surrounded by a predator-proof fence.

"I'm not sure if you've ever been out there at dawn, but it's a cacophony. It's brilliant to hear.

"[DOC ranger] Cody actually sent a clip of Tiritiri Matangi [in the Hauraki Gulf] in the dawn which is what this place should be like. It's deafening, man." 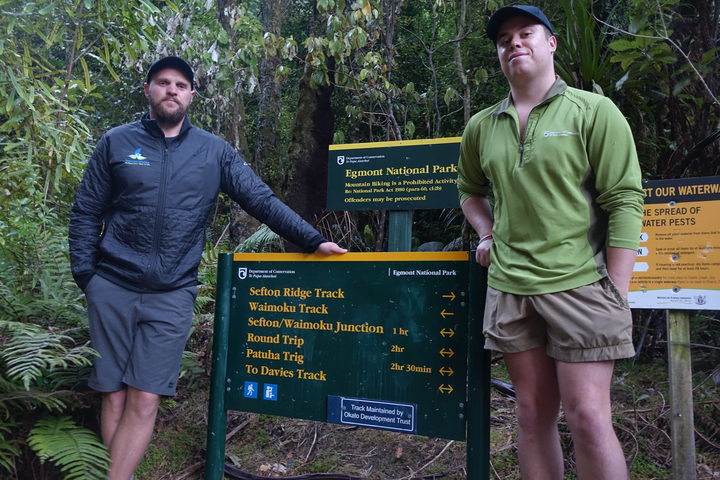 Mr Zieltjes said monitoring in the Kaitake Ranges showed possums triggered 45 percent of the devices set to detect or kill them.

The number was even higher for rats, reaching 80 percent.

"It is alarming. We are certainly not anywhere near where we need to be to achieve the restoration outcomes of the project or in returning species.

"You know, we're working hard to bring kākā, kōkako and kiwi back to this particular part of Kaitake and those predators need to be a lot lower [numbers] than they are today."

Mr Zieltjes said before kōkako could be reintroduced into the ranges, those figures would need to be below 5 percent generally and below 1 percent during breeding season.

"We're coming into the knock-down stage and there's no secrets here: the aerial 1080 is our best tool for that widescale knock down.

"The difference here is we're moving to a model basically where there's a lot less gaps in your operation and therefore you can target all of the possums in that area to completely remove those animals from this landscape."

About 570 traps have been set in an area spanning 8000ha in the Kaitake Range and a virtual barrier of 1700 traps will be put in around their boundary to prevent re-invasion. In total more than 7000 traps have now been set in the national park.

This will be supported by Regional Council trapping via its Towards a Predator Free Taranaki 2050 initiative.

DOC field ranger Cody, who only gave his first name for safety reasons, demonstrated the use of the Possum Master trap.

"You pull this lever down and there's a cord in here. You pull it down and up inside there's these two little sort of hooks and you hook the mesh around it and then when the possum sticks its head inside he triggers that and then the trap goes off and it strangles him."

Cody said there were about 150 Possum Master traps in the Kaitake Ranges.

They are reliable, but they have to be reset after each kill. He said a new battery-powered trap being trailed at the Pouakai Ranges virtual barrier could save a lot of work.

"There running a trap trial with a thing called a New Zealand Auto trap or AT220 which is a trap that looks like a stoat box - sort of like a DOC200 trap - and sort of weighs the same as well.

"And basically it lures itself and it can reset itself 200 times, and it has the ability to kill possums as well which is a huge thing for us."

Cody said the new trap would not need to be serviced for a year and shut down during the day to reduce the risk of by-kill of curious birds.

Mr Zieltjes said infra-red cameras and possibly even drones would be used along with other devices to monitor and target surviving pests and guard against re-invasion.

He acknowledged, however, the challenge the Taranaki Mounga project faced.

"At the same time it's really exciting to be in a region where people have realised that challenge. Like the Taranaki Regional Council, like these guys [DOC] and we're getting stuck into it."

A 1080 pre-feed operation is set to begin this month and about six weeks later the poison will be dropped.

Protesters blocked the North Egmont entrance in the national park ahead of the last 1080 operation there in 2016. 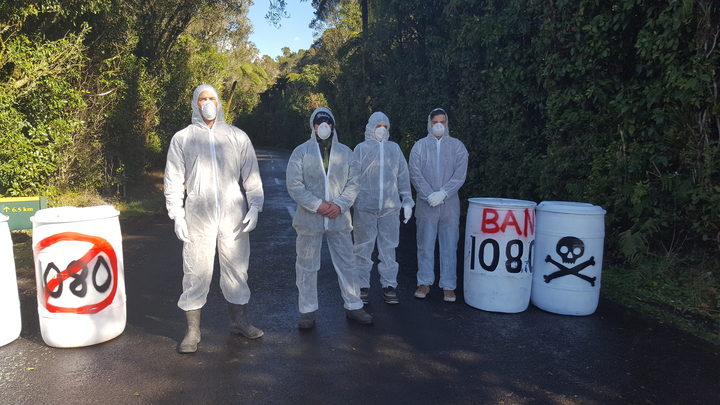 Protesters at the north access to Egmont National Park for the previous 1080 drop there in 2016. Photo: RNZ / Robin Martin

Why Mounga and not Maunga? In the dialect of Taranaki iwi, mountain is more often pronounced Mounga, rather than Maunga, and was certainly the more known historic dialect. Both pronounciations and spellings refer to the mountain.