Warning: This article may be distressing for some and includes references to self-harm and suicide.

Parents are concerned about reports of a new online game called the Momo Challenge which encourages children to self-harm. 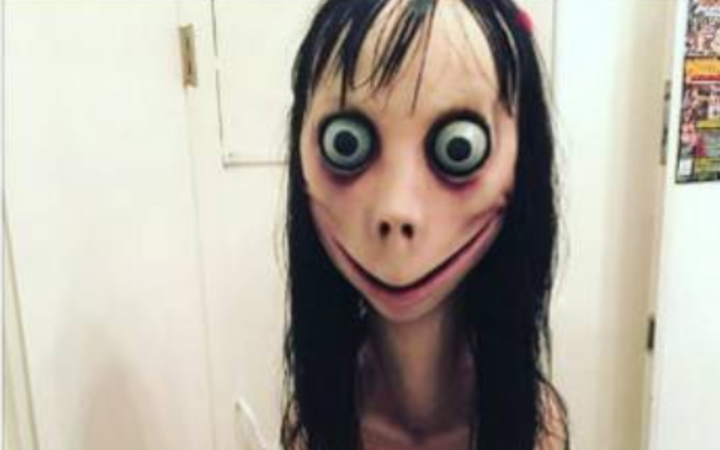 The viral game uses the character Momo - a puppet-like figure with wide, deep-set eyes and a terrifying smile - to scare children into adding a contact on messaging service WhatsApp, who then hounds them with violent images and dares.

The challenge encourages them to self-harm and the ultimate post tells them to take their own lives.

One Auckland parent wrote on Facebook that her two children were very aware of who Momo was and was warning parents that the character is appearing in the middle of Fortnite videos on Youtube. Her son and his friends have been watching these videos during lunch time at school.

"Which resulted in my seven-year-old bursting out in tears shaking & telling me 'stop saying her name, now we're going to be killed!' and my five-year-old daughter jumped into my arms crying saying, 'Shes coming now'."

The video has also shown up in Peppa Pig videos.

Police in Northern Ireland believe Momo is run by hackers who are trying to harvest information.

"Whatever or whoever is behind it, there is no disputing the content being sent is horrendous," the PSNI in Craigavon wrote on Facebook.

"One video of such an interaction in America I've seen, shows an ominous-sounding voice recording being sent to a child telling them to take a knife to their own throat.

"Another threatens family if a 'challenge' is not completed. It's chilling viewing.

"There are numerous variations and of course now imitators."

People with kids please monitor what their are watching. This #momochallenge is making kids commit suicide pic.twitter.com/nl4bZFt1Mn

3.2 sec to RT aware and very cautious of what your child watches on YouTube and KIDS YOUTUBE. There is a thing called “Momo” that’s instructing kids to kill themselves, turn stoves on while everyone is sleep and even threatening to kill the children if they tell their parents. pic.twitter.com/lBelP4kxIY

They said the danger lay with children feeling pressured to either follow the orders on any app by carrying out "challenges", or because of peer pressure in chat rooms.

"This is merely a current, attention-grabbing example of the minefield that is online communication for kids," reads the PSNI Facebook post.

That sick in the mouth feeling when you sit down to talk to your 7 year old about #MomoChallenge and he knows all about her!!

I asked my child today if she knew who momo was (she’s 3) and she said yes it’s a really scary girl. #MomoChallenge I’m NOT happy @YouTube. You need to figure out how to regulate your children’s tv better. We are yet another family who will discontinue watching.

Police in the Republic of Ireland have also raised concerns about Momo, appealing to adults to supervise children and vulnerable people's online activity.

A spokesperson for the NSPCC in Northern Ireland said: "The constantly evolving digital world means a steady influx of new apps and games and can be hard for parents to keep track of.

"That's why it's important for parents to talk regularly with children about these apps and games and the potential risks they can be exposed to.

"The NSPCC publishes advice and guidance for parents on discussing online safety with their children, as well as Net Aware - the UK's only parental guide to social media and gaming apps."

Among the most common signs to watch out for include children who:

It is understood the original artwork used by the hackers has been taken from a designer in Japan who has no connection whatsoever with the Momo challenge.