A second fruit fly has been found in the south Auckland suburb of Ōtara. It was discovered in a trap just 70 metres from where the first fly was found earlier this week. 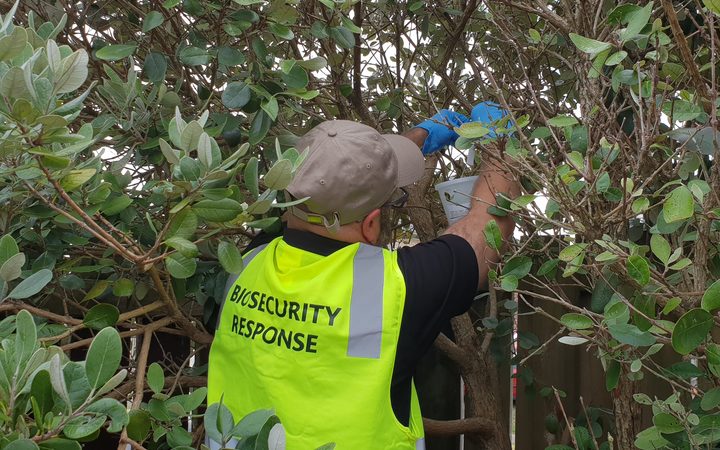 Biosecurity team set up fruit fly traps in in the South Auckland suburb of Ōtara after one was found. Photo: RNZ / Liu Chen

Biosecurity New Zealand said another male facialis fruit fly, from Tonga, was discovered in a trap yesterday - just 70 metres from where the first fly was found earlier this week.

This particular type of fruit fly is native to Tonga and officials believe it would be highly unlikely a breeding population would establish itself here.

"We remain of the view that it is highly unlikely that a breeding population of Facialis fruit fly would establish in New Zealand because of our climate," Biosecurity New Zealand spokesperson, Dr Catherine Duthie said.

"Facialis has never established anywhere in the world outside of Tonga.

"However, our enhanced surveillance programme in the area will continue as a precautionary measure."

Restrictions on the movement of fruit and vegetables are in place in Ōtara.

The fruit fly is not the same breed as the two Queensland fruit flies found recently on the North Shore - at Devonport on 14 February and Northcote on 20 February respectively.

In Ōtara, two separate single male Facialis fruit flies were found in surveillance traps on 18 and 20 February, both within the current control Zone A.

Parts of Ōtara are under a Controlled Area Notice (CAN).

The movement of certain fruits and vegetables out of the Controlled Area is restricted to help prevent the spread of any fruit flies if there are more than one. The CAN is a legal notice.

Additionally, no fruit or vegetable waste, such as fruit skins and cores/stones, peelings and the like, or garden waste such as prunings from fruit trees or vegetable garden cuttings, can go out of the area.

The fruit or vegetables should either be disposed of in a home in-sink disposal unit or put into specially-supplied Biosecurity New Zealand bins.

Those in Zone B cannot move home-grown fruit and vegetables out of the Controlled Area.

Commercially-purchased fruit and vegetables bought at the supermarket can be moved out of the area. Homegrown produce waste and garden waste needs to be disposed of in Biosecurity New Zealand bins.

The response and eradication of the fruit flies is estimated to cost millions. If there are no further detections, the operations in each area are expected cease14 days after the last detection.

If members of the public find larvae inside fruit or believe they have seen a fruit fly, they are urged to keep hold of it and call 0800 80 99 66.