The man who was swept out to sea with his friend after a landslide at Cape Kidnappers two weeks ago says they were unaware of a slip the day prior. 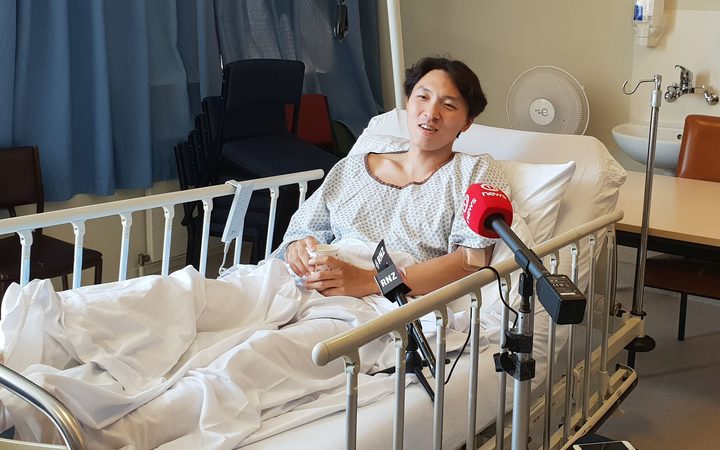 Jungho Son, 29, and his 22-year-old female friend were injured in the incident but are now in a stable condition in Hawke's Bay Hospital.

Tourist Denis Birnie captured this video of the slip pic.twitter.com/1DfTaTsfUC

Mr Son has been in New Zealand since January 2018 on a working holiday visa.

He said he had also talked to his family in South Korea, but has not told them how serious the accident was.

"They know I got my leg broken and they know the surgery went well but they don't know how much surgery did I get or how many pieces my leg got broken [into]. I don't want to give [them] details, not yet."

However, he said his mother had a feeling that it was pretty bad.

"The first time when I talked to my mother I make myself more positive or lighter, but she told me 'it's worse, right? You just try to make it lighter.' [I replied] 'Oh no, why should I do that.'"

His leg was broken in four places and he's had to have four operations - the last of which was six days ago. His friend broke her leg and pelvis.

Mr Son held an interview with media this afternoon, recounting how he and his friend were on their way back from seeing the gannet colony when the cliff collapsed.

"Actually when we passed that spot on the way to see gannet we thought it was more rocky than other place, because we could see a good amount of the rocks but we had no idea there was a collapse yesterday [the day prior to the accident].

"On the way back, we tried to pass that spot and then my friend just said 'hey, it's collapsing' so I looked up and I can see the dust, wind or something, and then I can see something like a rumbling sound and it started to collapse. I can see the big part of the cliff start to parting and then start sliding down and then I thought 'oh shit, it's really collapsing'."

He said by then it was too late to go back to where they were or return to their starting point - they were stuck.

"Then I just grabbed my friend's hand and rushed to the sea. I thought it would be better [in the sea], because it was the only way to get further away from the collapse, I thought at the time.

Then a large amount of rocks swept them away, he said.

"We got submerged. In the ocean, I could still hear the rumbling sound, because it was still going on, it was not one time, there was a second collapse.

He said he felt lucky that they both could swim, but the rumbling on the cliff continued and he was cautious to avoid it.

"I tried to reach my friend and I could still hear the rumbling sound, not big like the first or second collapse but it was still rolling and rolling sound.

He said he tried to drag his injured friend to shore in a diagonal way so that they were further away from any potential collapse and to reduce the chances of being hit.

"So if there's going to a third collapse or something I thought it's better to be far from the place."

He said he then noticed a boat nearby as well as a couple and they both yelled out for help and warned them there was a tour group around the corner of the collapsed cliff.

"Then the closer to the shore [we got] the more shallow [the water was], so it was a little hard for me to drag her anymore. Anyway at the time my friend told me she could do it herself from that point, we just tried to use our hands [to get to the shore] but it was really hard, because on the shore it was quite rocky."

Photo taken by Levi Heaps show just how big the slip at Cape Kidnappers was pic.twitter.com/bxr5LZD7Cj

He said more people came to their aid once they were able to reach the shore, including the couple nearby and the tour group.

He also tried to warn others near the site to stay away from the cliff and said he even tried to straighten his broken leg, so as to not traumatise any of the young people who were trying to help.

"The helicopter couldn't land quite close from us because of the danger hazard so they got to move us to the chopper and then they tried to lift me up, and oh there was quite a good amount of pain. I screamed a lot."

Asked whether he was aware of the dangers, he said he didn't want to place blame on anyone and thought DOC were the right people to make a call on whether the area should be closed.

He said he had been planning to do a lot of things before his visa expired, but the accident had made it all simpler and now his only goal was to return home.

"I like trekking, I love nature. That's why I got this injury though. Just one or two days ago [from the accident] I got my extension visa for another three months. So I didn't plan to spend my visa in this way though."

He said he had been visited by his friend and people from the Department of Conservation (DOC).

He was recovering well and receiving physiotherapy for his injury and said he wanted to personally thank all those who helped them.

"That's the reason why I'm doing this interview here. I really want to say thank you to all the people who helped us. Emergency staff, or people, tourist and citizens or whoever helped us.

"We were really lucky that we could have people around us at the time. I will go back home [and then] there is no chance to say thank you, so I want to say thank you. That's the one reason, the only reason I'm doing this."

DOC said it closed all vehicle and pedestrian access to the Cape, along the beach from Clifton, given the continuing rockfalls.

Specialist engineers are assessing the area and DOC said it would update the public after that.