Animal rights activists have staged a protest outside a Martinborough bull ride, calling it animal cruelty. 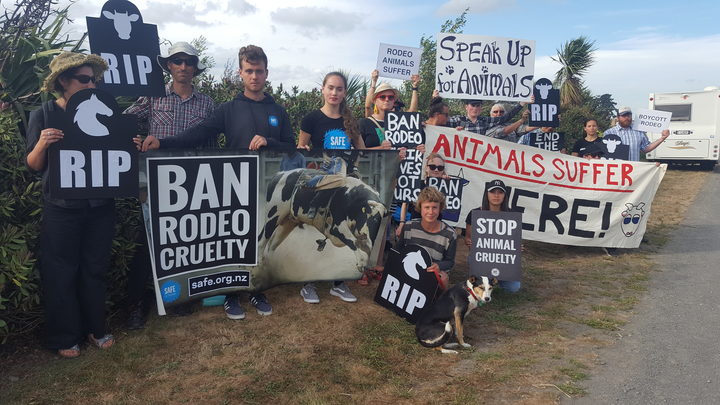 About 45 protesters marched to the event Friday evening and stood guard along the entrance to the Martinborough Stockyards, holding placards.

Organiser Paul Christeller, from Speak Up For Animals, said the group wanted the government to make good on a promise to review rodeo events, and wanted them to be banned.

Protesters had travelled from throughout the Wellington region to be there, he said.

"We're here because animals continue to suffer and die for entertainment value in rodeos in New Zealand.

"It's inherently cruel, all the events cause a massive amount of suffering to the animals. We wouldn't treat domestic animals in this way - cats and dogs, so there's no reason to do that for the animals involved in rodeo."

There have already been two animal deaths at rodeo events this season, which was unacceptable, he said.

A bull and a horse died at a Gisborne rodeo on 27 December.

Friday's silent protest attracted a few supportive hoots, a few jeers, and the odd tirade from rodeo fans driving past, but was otherwise peaceful.

Several thousand spectators turned out to the Pukemanu Bull Ride, with cloud and winds dampening down the high summer temperatures from the past week. 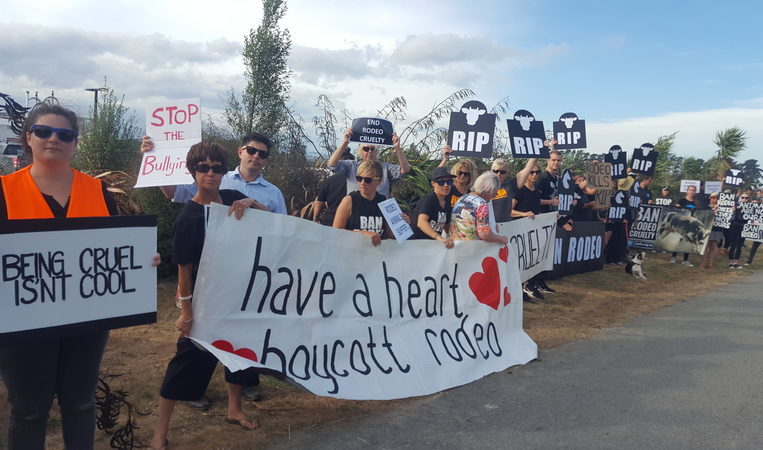 Organisers said the animals were treated well, rules followed, and most protesters had probably never been to a rodeo event to see for themselves.

NZ Rodeo Cowboys Association member Simon Tahau was an animal welfare officer at the event, and said he kept a close eye out for the animals.

Two vets were on site just in case, but hopefully would not be needed, he said.

"We do the best we can to keep them as healthy as we can.

"My job's pretty boring, it's good - the cowboys ... love their animals, we know the value of having healthy stock."

Rodeo is good family entertainment, with a fun atmosphere, he said.

"There's a lot of different personal views about it - my opinion is that everyone's got their own opinion and they're entitled to it.

"The problem with these sort of protesters is that what they know you could write on your thumbnail ... they just can't be bothered finding out the truth about the matter."

On 12 January, protesters inside a Whangārei rodeo event were pushed, harassed and sworn at by fans as they tried to film the event, where filming was restricted.

Later the Rodeo Cowboys Association said they understood the frustration of the rodeo supporters, but their hostile actions towards the protesters were not okay, and were not endorsed by the association.

Both Mr Christeller and Mr Tahau said each side at the Martinborough event wanted to keep things peaceful.

In 2016, a petition with 60,000 people's signatures was presented to parliament, calling for a ban on rodeos.