Bay of Islands boaties are being asked to give a bottlenose dolphin carrying her dead calf some space. 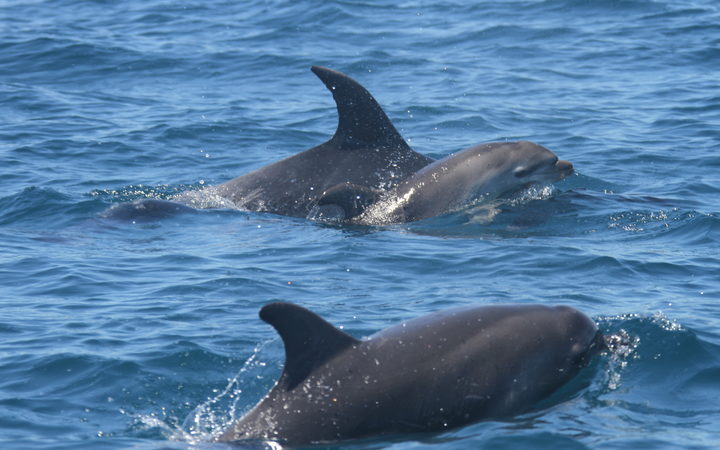 A mother dolphin is seen carrying her dead calf in Bay of Islands. Photo: Supplied / DOC

The grieving dolphin was spotted carrying the calf, suspected to be stillborn, on her back two days ago.

Department of Conservation (DOC) biodiversity senior ranger Catherine Peters said the grieving dolphin needed space and time to get over the loss.

"The mother is grieving and needs space and time to do this. The Bay of Islands is a busy place in summer with a lot of activity in and around the water.

"This female needs everyone on the water to give her the extra space and respect she needs whilst she copes with her loss."

The other dolphins have at times separated from the female leaving her vulnerable.

The mother has also dropped the calf frequently, and then circled back to retrieve it.

Dr Peters said dolphins could hold on to their dead calves for weeks and she suspected from the way this dolphin was behaving, she might be a first-time mum.

"With the way she's behaving and her resilience with holding on to this baby, we're expecting that this might continue at least for another couple of days."

She said that people shouldn't swim with the dolphin calves and ensure they stay 300m away if they were on a boat.

Dr Peters said that if in doubt all dolphin groups in the Bay of Islands should be avoided.

DOC said summer was the time when most dolphins gave birth and if the mothers were subject to disturbance they could be prevented from doing what was necessary to care for themselves and their calves.

However, Dr Peters said there were live baby dolphins swimming around the Bay of Islands.

"We currently in the Bay of Islands have another three dolphin calves that are here on a regular basis and they've been swimming around this area all summer and they are apart of that larger group that this mum was in."