Auckland Council and residents are demanding answers from the Defence Force about the threat firefighting foam chemicals pose to human health and endangered birds after its report went public, but it is refusing to investigate further. 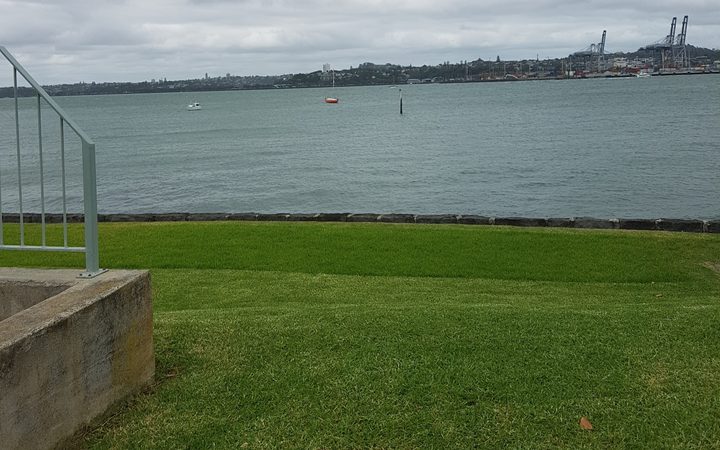 The harbour next to the Devonport Naval Base. Photo: RNZ / Sophia Duckor-Jones

A 50-page study released to RNZ under the Official Information Act shows long-lasting per and poly fluoroalkyl substances (PFAS) accumulating in some shellfish samples at the navy's fire training site at Ngataringa Bay exceeded a trigger point for further investigation into human health effects.

It also says there is a risk to a dozen species of birds that feed on mudflats.

The contamination is highest - "significantly" exceeding ecological and human health guidelines - near its Sea Safety Training Squadron on Ngataringa Bay at Devonport.

However, the Defence Force has ruled out further investigation - despite the study itself saying that would be required to determine the threat from eating contaminated shellfish.

NZDF also suggested there were other reasons for the chemical exposure, despite levels at the Stanley Bay dockyard around the corner being much lower.

There are thousands of the chemicals, but only two - PFOS and PFOA - are banned in New Zealand. The chemicals biomagnify, meaning levels increase at successively higher levels up the food chain.

The damaging compounds have contaminated water and soil around other Defence bases at Whenuapai, Ōhākea and Woodbourne, at airports and around petrochemical sites.

Treatment plants are not able to get rid of it, and at Devonport it is getting into the council sewer system.

The Defence Force stopped using foam containing PFOS and PFOA some years ago, but was training with foams containing other PFAS until recently.

What's in the study?

The newly-released study is based on lab testing of small numbers of samples across groundwater, wastewater, marine life and sediment.

It found three mollusc samples exceeded a Food Safety Authority "trigger point" for further investigation into the impact on human health from eating them.

"Therefore, further investigation would be required to determine if there is a risk," the study said.

Further investigation would also be needed to determine risk to the dozen or so species of threatened birds that use the bay and its mudflats, including internationally significant numbers of banded wrybill.

Some of the catseyes, horn shells and whelks on the mudflats have PFAS in them at up to 15 times the guideline for protecting birds from accumulating the toxic chemicals in their organs in what is known as "secondary poisoning", the study showed.

The guideline was exceeded in five out of 11 invertebrate samples.

"Consequently, invertebrates inhabiting the mudflats ... pose a potential risk to birds that consume them," the study said.

The more common foods of shorebirds - such as tiny worms and shrimps - were also not covered by the study.

"We need to know is this contamination endangering these birds?

"We've got wrybils, we've got godwits, we've got dotterels, pied stilts, variable oystercatchers that are nesting there and feeding there in the bay. Is the New Zealand Defence Force endangering these species?"

It said it was reviewing the Defence study to help it understand any impacts on local people and the environment and to determine any further steps to take.

"The health and welfare of residents and the surrounding environment is Auckland Council's top priority," it said in a media release.

"NZDF suggest further investigation would be required to determine if there is an actual risk to people from consumption of these invertebrates in Ngataringa Bay," an internal Auckland Council memo said.

Local councillor Chris Darby tried for months to get hold of the study - and said now that he has it, he still has more questions.

"There are some worrying signals in this report that do require further investigation," Cr Darby told RNZ.

"I am assuming that NZDF have got further investigations to be undertaken because the clarity in some areas is not there at the moment."

The study discounted any risk to fish or from people eating them, but Cr Darby said the sample size was very small.

"I'm very conversant with this particular bay and from what I am reading I would not be collecting shellfish and I would definitely not be taking fin fish in this location."

"The results give us a good overall picture and we consider no further testing is necessary," NZDF said in a statement to RNZ.

"NZDF has undertaken comprehensive testing of Devonport Naval Base and nearby Ngataringa Bay over a period of time to determine the extent of any potential contamination from the historic use of firefighting foam containing PFAS at Devonport Naval Base.

"We have been working closely with Auckland Council and all results have been passed to the Council."

Cr Darby has asked Defence to send someone to brief councillors on the study.

The Defence Force knew about the contamination at Devonport for months before it told the council about a year ago. It gave the new detailed study to the council in mid-December, under an embargo.