Severe wind has been battering the Queenstown area, with reports of downed trees and power cuts this morning. 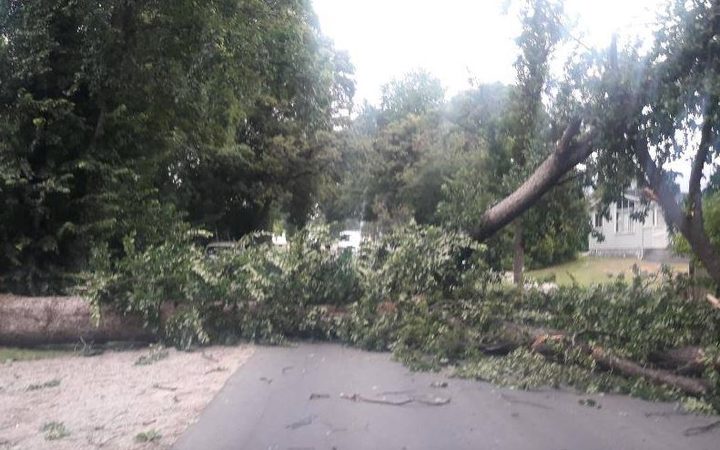 Some residents in Wanaka are without power, and forecasters say the temperature in Queenstown dropped 9C between 6am and 8am.

Strong, damaging winds have also hit other parts of the South Island, as an active front moves to the northeast.

Queenstown Lakes District Council said on Twitter this morning crews were busy removing trees that had fallen down on Centennial Ave in Arrowtown.

Centennial Avenue reopened about 10am, with a stop/go system to be put in place so some remaining wood on the road verges can be removed.

Centennial Avenue in Arrowtown is now open - trees have been removed from the road, although Stop/Go may be introduced soon to remove wood remaining on verges. We'll update once we've got details of this.

Emergency services are also working to clear tree debris on the road by the Edith Cavell Bridge, near Queenstown after a large tree fell this afternoon.

The tree fell on Arthurs Point Road, which has been closed while the debris is cleared.

The bridge overlooks the Shotover Jet Base where a young boy and woman were critically injured after being trapped under a tree brought down by high winds last week.

MetService issued warnings for Otago and the Canterbury High Country and foothills.

It said winds could gust up to 130km/h in some places, damaging trees, powerlines and unsecured structures, and making driving dangerous.

The severe weather is expected to reach further north by this afternoon.

MetService said the system would put an end to official heatwave conditions across parts of the country over the next couple of days.

Meteorologist James Millward said the weather front moving quickly up the South Island today was set to reach the North Island from tomorrow.

"So we've got a severe weather warning out for the Canterbury High Country and foothills until about 2pm today," he said.

"We also have a severe weather watch for southerly winds approaching severe gale this afternoon for the Kaikōura Coast and Canterbury Plains, and that's actually behind the front."

Mr Millward said the cold snap triggered a 14C drop in temperature in Dunedin in less than 12 hours.

He said heavy rain had fallen west of the Southern Alps this morning, with 38mm in an hour recorded at Milford as the front passed over, and 75mm for the whole morning.

"We still have a heavy rain watch out for Westland until 2pm today, so there's quite a lot going on, and that's even before we get to the temperatures."

Mr Millward said the weather would remain hot in Nelson and Marlborough, until the cold air was expected to hit later tonight.

"Blenheim is still looking at a maximum of 29C today, and Kaikōura 31C but tomorrow those temperatures will come right down tomorrow."

He said Kaikōura was looking at a maximum of 19C tomorrow, and 21C for Blenheim.

Meanwhile, Niwa has released its predictions for climate conditions for the next three months and the country could be in for a warm autumn, with summer temperatures and humidity set to continue.

More rain than usual could be on the way and subtropical areas north of New Zealand could get heavy downfalls.