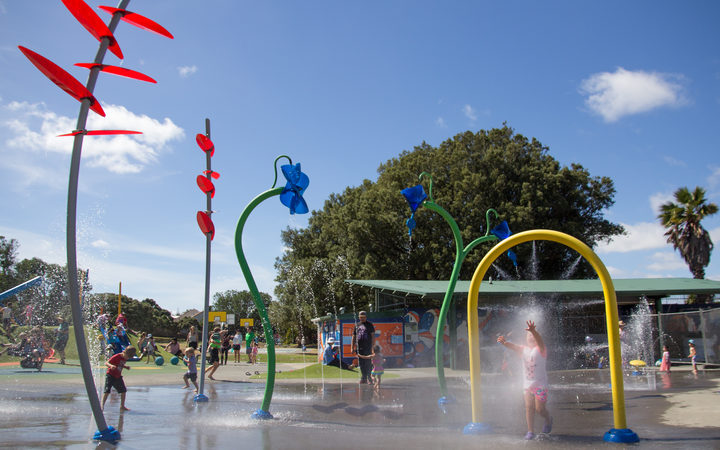 Dams that supply Aucklanders' water are 92 percent full, but people are being urged to think about water conservation. Photo: 123RF / Angela Gibson

As the mercury rose, so did consumption, and Watercare worked to supply more treated water, so the taps didn't run dry.

Watercare said the dams that supply Aucklanders' water were 92 percent full, but people were being urged to think about water conservation.

MetService meteorologist Georgina Griffiths said widespread was the key to the heat.

"We actually saw a few records in Auckland tumble [yesterday], we had 30 degrees in many of the suburbs inland away from the coast where the seabreeze couldn't get to, to cool things off."

The heat is expected to last a little longer, but forecasters say there should be some reprieve on Friday.

The hottest places in the country were Kawerau at 34.3C, followed by Taumarunui at 33.6 and Galatea at 33.4C.

Meanwhile, Wellington residents are also being urged to cut water use as the region continues to swelter in high temperatures.

The Wellington suburb of Kelburn had its hottest day on record, reaching 30.3C yesterday, following on from record-breaking heat in Richmond the day prior.

Another three other records were also broken yesterday, according to MetService.

Yesterday was wera (hot)! So hot in fact that a number of our weather stations broke their own records for highest recorded temperature! Check out today's temps at https://t.co/KjoElHh2uF ^Lisa pic.twitter.com/K6c0DSIE6x

Mr McKibbin said water use has increased right across the region, including Lower and Upper Hutt and Porirua.

In the past three days consumption has gone from about 160 million litres a day to 180m.

Water restrictions are also in place for Gore in Southland, despite hopes heavy rain late last year would keep drought at bay this summer.

The Gore District Council changed its water restriction regime last year in a bid to lessen the impact on residents.

Under level one restrictions, residents, businesses and industry users need to use hand-held watering for grass areas.

"We are in a much better position than this time last year, but we are going into what is traditionally a hot, dry month," Mr Bayliss said.

This time last year, stringent water restrictions were imposed on residents after the region experienced its driest year in almost half a century.

Aquifer levels, which supply the town's water, have been steadily declining since early December as recent rainfall has not reached the Mataura River headwaters.

"As a result the river and aquifer levels have remained low," Mr Bayliss said.

Water consumption throughout January has been averaging 3.6 million litres per day, which is below the long-term average summer demand of 3.9m litres per day.

Restrictions are also in place for Clutha District residents with concerns they could escalate if more water is not conserved.

Watering is allowed from 8pm to 8am, but systems can not be left unattended or on overnight.

If escalated to Stage 2, all sprinklers and irrigation systems will be banned and only hand-held watering will be allowed between 8pm and 8am.

The Clutha District Council said more water was being used than produced for the town of Tapanui, which could force more restrictions to be imposed unless water was better conserved.

It has asked residents to report any water leaks in council pipes and fittings to their closest council office.

The Tasman District has moved to stage three water restrictions, which means a 50 percent cut in water for many on the Waimea Plains.

Nelson will help out by supplementing Tasman's water supply on the regional boundary in the town of Richmond.

Stage one water restrictions have also been introduced in Nelson as water levels in the Maitai Dam continue to drop due to the dry weather.

The restrictions apply to the use of sprinklers on gardens, lawns and orchards, but do not apply to areas used extensively by the public, such as bowling greens, golf course greens, cricket pitches and public gardens.

Handheld watering is still permitted but only one hose may be used at a time.