A Dunedin man who allegedly vandalised a tooth sculpture has been charged with wilful damage. 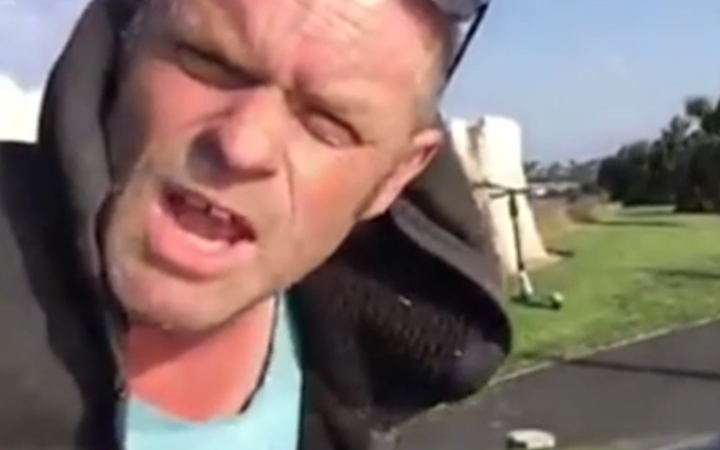 Gary Hughes, 52, appears to use a chisel and hammer to damage the tooth sculpture. Photo: RNZ / Supplied

Sergeant John Hedges confirmed this morning Gary Hughes, 52, would appear in the Dunedin District Court on Tuesday on a charge of wilful damage following a formal complaint from the city council.

The council complained to police after Mr Hughes posted a video of himself on social media allegedly chipping off a hand-sized chunk of one of the six large Oamaru stone Harbour Mouth Molars.

Sgt Hedges said he asked Mr Hughes to take down the video, which went viral on Dunedin social media on Sunday and garnered more than 10,000 views, but he had failed to do so.

Mr Hughes said he disliked the molars as they blocked the view of the harbour and had no aesthetic value, claiming his alleged vandalism was a form of political protest against a lack of consultation before the $45,000 sculpture was installed.

"I didn't like they way they were forced down our throat.''

Mr Hughes was in a defiant mood yesterday, prior to the confirmation of charges against him, describing the Council complaint as "frivolous and vexatious''.

"If the council wants to waste more money chasing me in court, they can go for it.

"I think [the teeth] should be pulled, and they should put them at the new dental school.''

Mr Hughes said he was heartened by the overwhelming support of people he talked to in person, who also disliked the sculptures, but said he regretted the way he had gone about his protest.

He planned to challenge the legal basis of the sculptures on the grounds they lacked proper paperwork and did not meet earthquake safety standards.

Meanwhile, the artist who created the sculpture said he was more worried about the man's state of mind than the alleged attack on his art, as "a seagull could have done more damage''.

"I'm pretty amazed what we got done for the budget.''

Mr Gentry said he was unconcerned about the alleged attack due to the minimal damage the tooth sustained.

But he was concerned at the state of mind of Mr Hughes, who he suggested should "chill out a bit''.