A Niwa scientist has created what he says is a music score written by nature. 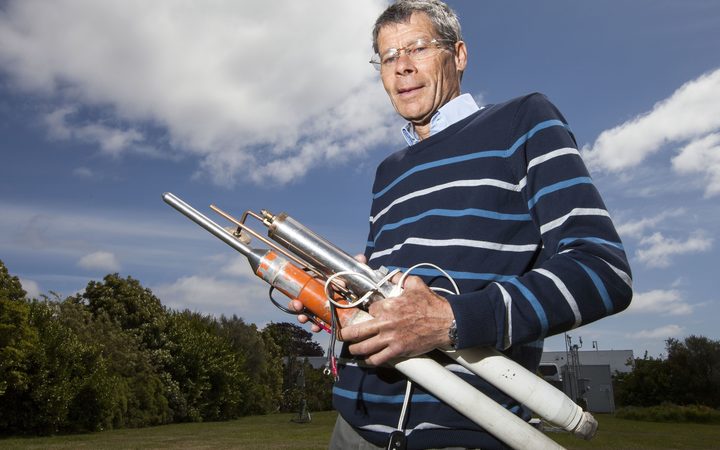 Weather records of rainfall, river levels and even the rise and fall of the tide have been blended into a musical score with instruments on a tailor-made computer program by hydrodynamics scientist Graeme Smart.

He said the modern symphony which sounded surprisingly harmonic, began with a request to jazz up a recent science symposium.

Dr Smart's expertise is in assessing natural hazards from floods, caused by storms and tsunami.

"Part of our work is studying time series graphs, and how these hydrological variables such as rainfall and windspeed change over time."

He said the symposium called for presentations that were more original and artistic.

"I had the idea, why don't we convert this data into music."

Dr Smart set about converting weather records into a musical score. A computer was then used to play the score with different musical instruments assigned to each of the weather components.

He used a month of data of Christchurch temperature, rainfall, windspeed and direction, plus Arthur's Pass rainfall, Waimakariri River levels and Sumner Head sea level for his creation. The hourly values were played at a rate of four per second.

Dr Smart said it was not composing new music, but using nature as the composer and trying to present the things we see in nature, like the rise and fall of the tide, played as an instrument in an orchestra.

He said the sound of a tide rising and falling depended on how fast it was played.

"What we've done in this case is take a whole month of hourly values and played them at four per second, so the tide is almost like a beat in the background. Often in music, particularly pop music, you'll have some sort of beat and the tide provides that in this music."

Dr Smart took rainfall from the mountains and the plains and gave them different instruments.

"The rain in the hills is a deep, orchestral type of instrument and on the plains it's more like a glockenspiel or a doorbell."

He said the Arthur's Pass rainfall sounded "a bit like orchestral thunder in the hills", and the river sounded more like a bassoon.

Dr Smart said he was not so much a musician himself, but was certainly interested in it.

"This is just about looking at things from a different perspective - it's about bringing science to a wider audience."

He said the score was a big hit at the conference, with some thinking he had convinced a symphony orchestra to record the piece.

"Someone else suggested that instead of having the weather report every morning, just play today's tune and everyone will know, 'oh, there's going to be thunder in the hills at 1pm', just from listening to the daily music."

Dr Smart advised listeners that the piece sounded better in 5.1 channel surround-sound, in which it was created.

"The rainfall is way off in the hills, the sea is behind you rising and falling, and the wind moves around as the wind direction changes - the instrument in the orchestra playing the wind tune moves around the room, so you miss a wee bit if you just listen in mono on the radio."

Dr Smart said the visually impaired will be able to appreciate the pattern of daily variations in temperature, just by listening.