A New Zealand aid worker helping tsunami victims in Indonesia says the coast is a scene of "extreme destruction". 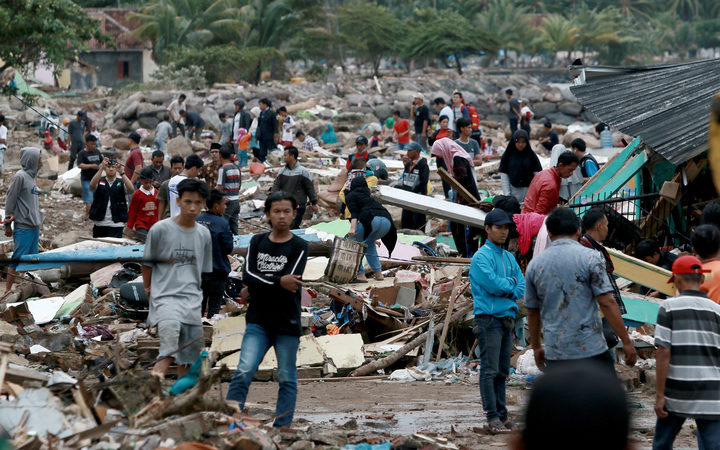 Rescuers and residents look for survivors along the coast in South Lampung on South Sumatra on 23 December, 2018, after the area was hit by a tsunami a day earlier. Photo: AFP

Saturday's tsunami was caused when a bank of the Anak Krakatau volcano collapsed, sending a powerful wave measuring about a metre high into surrounding Indonesian islands.

Authorities say at least 479 people have died and hundreds more are missing.

Rosemary North is in the Banten province of western Java, she's one of many Red Cross workers providing clean water and food to survivors.

"Driving around the coastline yesterday you could see various pockets of extreme destruction," Ms North said.

"Going around the coast there are containers that have obviously been washed across the road or pressed up against trees right next to the road, or houses that only have their roof left, all the walls are gone."

As a result of the tsunami, and the threat of further tsunamis should more of the volatile volcano collapse, about 16,000 people have moved inland, fleeing the coastline. 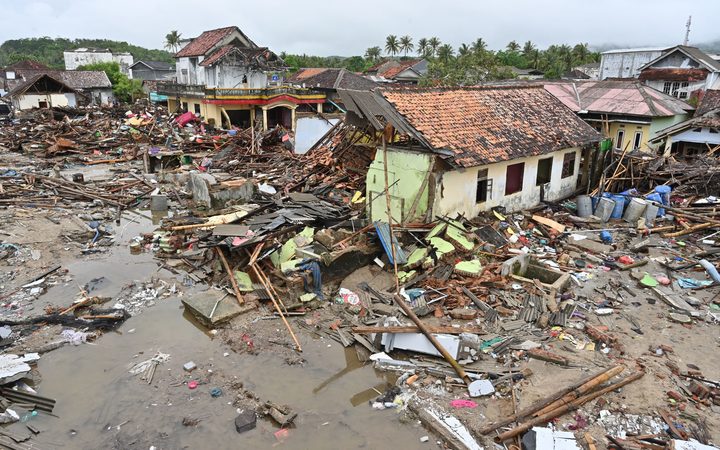 Damage caused by a tsunami is seen in the Sumber Jaya village in Sumur, Pandeglang, Banten province. Photo: AFP

Ms North said people were scared of what might come next.

"People are really jittery," she said.

"We heard about a town yesterday where a rumour went around that a big wave was coming, and people just started running.

"There was nothing coming. It was just the very high water levels because of the full moon and these high tides."

Ms North said Indonesians were well prepared for disasters, but the tsunami struck without any warning.

"You know, people call Indonesia a supermarket for disasters - really you have everything here, and you have it quite a lot," she said.

"So, communities here were aware [of the threat of tsunamis], but they just didn't get the warning."