Google says it is taking measures to ensure it doesn't breach New Zealand's suppression laws, after the man accused of killing Grace Millane was made public. 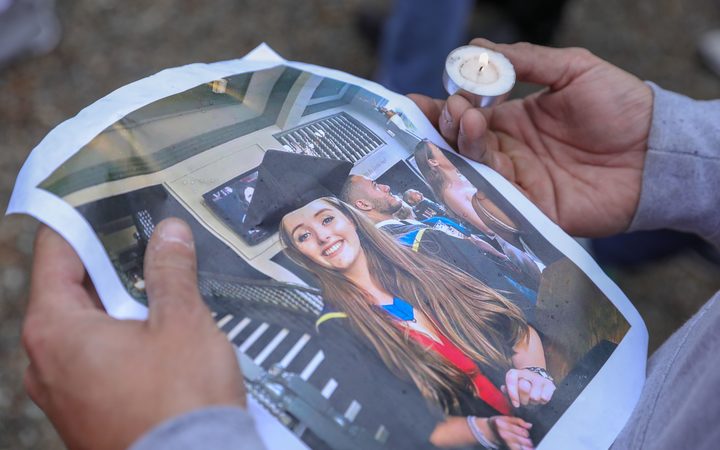 The case of Grace Millane has gripped the hearts of many, with vigils held across the nation earlier this week in her memory. Photo: RNZ / SIMON ROGERS

Ms Millane was a British backpacker who went missing on the eve of her 22nd birthday on 1 December.

A body was discovered last Sunday, in an area of bush just 10m off the road, in Auckland's Waitākere Ranges.

A 26-year-old man was charged with murder and appeared in Auckland District Court. He has interim name suppression.

Meanwhile, Google has been criticised for sending an email containing the "trending searches" of the moment.

The accused's name was among those popular search terms, prompting concern about how this may affect any future trial.

Despite multiple requests over two days, no-one from Google agreed to be interviewed.

The company instead put out several short statements, including an assurance it will take measures to ensure such a breach doesn't happen again.

"There are some controls in place to ensure the alert doesn't feature inappropriate content (for example adult content) and the trending query needs to have an associated news story."

One statement also said the email in question reached "less than a few hundred people".

The man's name has appeared in overseas media and as of yesterday evening there were more than 100,000 searches of his name on Google, despite the suppression order.

Public law expert Professor Tony Smith - who wrote the Law Commission's recommendations that formed the basis of the proposed law change on contempt of court - said name suppression was "a contentious issue".

Prof Smith said some of the information about the accused in the Millane case in the public domain could be viewed as prejudicial and his lawyers could argue he would not get a fair trial.

"That does get in the road of managing a trial if you're a judge when the first thing a defence lawyer says is 'I don't think my client can get a fair trial'."

Justice Minister Andrew Little is meeting Google representatives on Tuesday to make it clear that the integrity of fair trial rights cannot be left to "algorithms and machines".