Wellington City Council went against engineering advice when it approved a major waterfront building that ended up irreparably damaged in the Kaikōura earthquake. 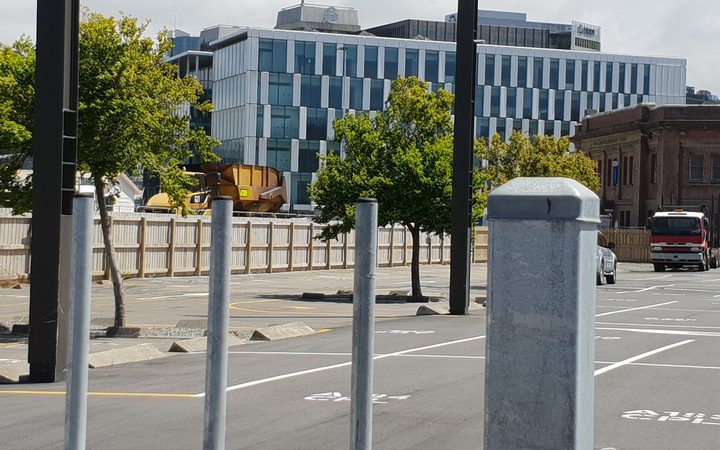 Engineers who appraised the building raised multiple concerns about the BNZ Harbour Quays including about how much it might flex in a quake.

The engineers said the council's latest statements to RNZ suggesting they were okay with the design, had misrepresented their position.

Since the 7.8-magnitude quake two years ago, investigations on the waterfront have centred on how the now-demolished Statistics House failed.

But next door, the $100m BNZ Harbour Quays, is also about to be pulled down. Beca, the engineers for the building, won awards for it. However the building performed so badly in two quakes that it has now been off limits for almost as long as it was open.

RNZ asked the city council if it got any engineering advice warning about Harbour Quays' design.

The council replied under the Official Information Act that the firm it hired to review Beca's design raised some questions, but they were settled.

"We consider this response grossly misrepresents our position," it said in a letter to the council on Friday which was also released to RNZ.

The council had made other "misleading" statements to RNZ about a design review being done, and three months of talks "where the council worked with Spencer Holmes and the designer (Beca) to ensure we were comfortable with the proposed design".

"We were never comfortable with the design," Spencer Holmes said.

"We consider the WCC issued this building consent contrary to the advice of SHL."

SHL pulled out of reviewing Harbour Quays in 2007 after butting heads with Beca about critical structural questions affecting the floors, walls and frame.

Among the issues raised were:

Documents released to RNZ show many of these questions were never resolved.

The building did not have a full design review but the council issued a consent in early 2007.

In the place of a full design review, the council sent RNZ a one-page letter from an academic supporting Beca's design of the floors.

"This peer review and the large number of RFIs [requests for information] meant that the designers were able to satisfy the council that the proposed works would be building code compliant," its OIA response said.

RNZ understands that, earlier this year, SHL told the government its Statistics House investigation should be aware of what happened at Harbour Quays.

The council, in the OIA, told RNZ that earlier this year it called in an unidentified, independent engineer to look into how Harbour Quays was consented.

"The reviewer concluded that 'on the basis of the rigour of the [Spencer Holmes] review, the thoroughness of the Beca responses and the expertise demonstrated by the applicant [Beca], in my opinion, WCC had reasonable grounds to issue building consent for this project'."

However the reviewer's report lists many of SHL's questions or suggestions as unresolved.

For instance, there appears to be no record of the council following up on an SHL suggestion to suspend the consent to build foundations, until questions were answered.

There also appears to be no record that some of the structural steelwork was ever consented.

Engineers at odds about review over Harbour Quays

The independent reviewer lists a host of other questions from SHL as having been "implicitly" dealt with.

"At no time did the city council nor the independent engineer who prepared the review contact Spencer Holmes for comment or context. We find this remarkable and ethically substandard.

"There was no resolution of these outstanding issues as far as we were concerned."

SHL has asked the council to identify the engineer who did the 2018 review.

It has asked it to recall and correct the OIA response.

More than 1000 BNZ staff went back to work inside Harbour Quays following months of repairs after the 2013 Seddon earthquake which brought down many ceilings.

The council said it had gone back over its records and "confirmed factual inaccuracies" in the letter sent to it by Spencer Holmes.

"We will be discussing these with Spencer Holmes directly," it said in a statement today.

"The City Council stands by its decision to approve the building consents relating to Harbour Quays and release the information under the Local Government Official Information and Meetings Act following a request from Radio New Zealand."

The council declined to give an interview.

RNZ has asked BNZ what it was told about the engineering questions raised during the consents process, when it made the decision to return to the building.

BNZ's Head of Properties Steven Culpan said engineers told it the building performed as intended during the 2013 quake, in that the damage was caused to the fitout.

"We had the building assessed by engineers and construction specialists, and so did the landlord. Both BNZ and CentrePort engineers assured us that the building was structurally sound," he said in a statement.

Harbour Quays' owner Centreport said it was was not aware, "to the best of its knowledge", of the design review issues until now.

"After the 2013 earthquake the building was fully assessed by two independent engineering firms on behalf of CentrePort," it said in a statement.

Beca at first declined an interview, saying it was "inappropriate" given "the complex and technical nature of some of these issues".

However, it asked for written questions from RNZ, which were provided and included:

Late today Beca refused to make any comment and referred RNZ to the city council.