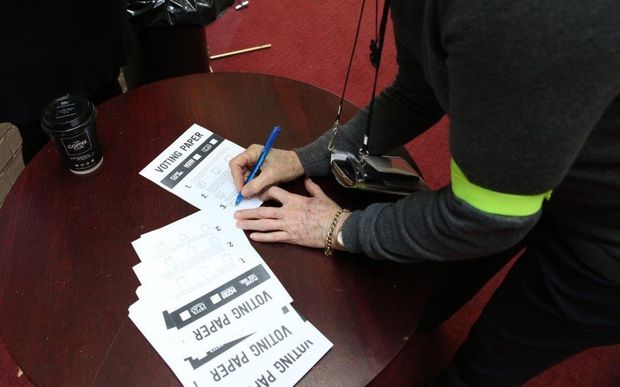 A secret online ballot closed last night and members will vote next year on whether to go on strike.

Teachers union NZEI Te Riu Roa President Lynda Stuart said the message from members was that the offers still did not do enough to fix the crisis in teacher recruitment and retention.

"From the beginning of this process we've been clear that to attract and retain teachers we need to be paid fairly and have the time and support to ensure every child gets the best possible education," she said.

"While the latest offer for teachers included a total salary increase of approximately $9,500 - $11,000 over three years, it failed to address the important issues of time and class size, which underpin the crisis in education."

The offer would not give teachers more time to teach or principals time to lead, she added.

"It's why teachers are leaving the profession.

"There's an expectation that every student is an individual, which they are, but that they have to be taught as one. It's a huge amount of paperwork."

Ms Liddall said that for every hour in the classroom, teachers spend an hour on planning.

"Secondary school teachers get a day a week for planning. We're asking for an extra day a term.

Ms Liddall said the issue needed to be urgently addressed.

"While we wait, while we talk, we're getting nothing. I've got three staff leaving because of it.

The union had informed the Government of the outcome of the ballots, and would seek further negotiations immediately.

NZEI members have been seeking a 16 percent pay rise over two years, and have been offered 9.3 percent over three years.

They want a new offer by early in Term 1.

"There isn't enough staffing going into schools which is why we have astronomical class sizes," Mr Rutherford said.

Mr Rutherford said the union wanted a settlement that would attract and retain teachers.

He said the vote against the offer was "overwhelming" but would not give out a percentage.

"Nobody wants these disputes running on longer than they have. Teachers and prinicipals are resolute about this issue," Mr Rutherford said.

Education secretary Iona Holsted said the ministry was inviting NZEI to return to the bargaining table.

"The Authority also acknowledged the commitment of the government to working with teachers to gradually address the sector's needs. This includes the current activity on workload and supply."

She said it was addressing NZEI's concerns about workload by spending an extra $500 million for learning support and $40 million to boost teacher supply in the short to medium term.

"We have a joint taskforce with teachers and principals to identify compliance-related administrative tasks that can be reduced or eliminated to free up time for principals and teachers to teach," she said.

"We remain committed to continuing bargaining in good faith and minimising any further disruption for students' learning and parents remains a priority. It is only by negotiation we will settle this long-running dispute."

She said they want to meet with the union to discuss options for reaching agreement within the $698 million package.