School's out in Auckland today as primary school teachers take to the streets and march in an effort to secure pay rises, smaller class sizes and more resources. 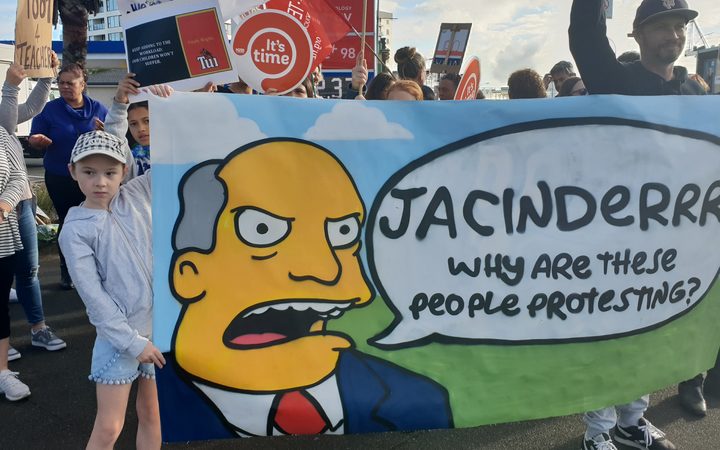 It's the first day of a rolling nationwide strike set for this week, and it's estimated around 320 schools will be closed in the Auckland region.

Here's what you need to know about the strike action:

Why are teachers striking?

Teachers voted overwhelmingly to go on strike in an effort to get smaller class sizes, more resources and significant pay rises.

Contract negotiations collapsed last Thursday after the Ministry of Education agreed to fund a half day's paid leave to allow teachers to consider the latest offer, but after consultation with some members, the union demanded a full day's paid leave.

In a last-ditch effort on Thursday afternoon, the ministry put forward a pay offer which the union's 30,000 primary teacher and principal members will consider at meetings during the rolling strikes.

The union members will discuss the offer and vote later this month whether to accept or reject it.

What was the latest pay offer from the Ministry of Education?

The Ministry of Education put forward an offer on Thursday, 8 November after a week of bargaining facilitated by the Employment Relations Authority.

The government's offer includes an increase to most teachers' pay by 9 percent over three years, a new top of the pay scale from 2020, an a $500 lump sum for union members only.

Key in the offer includes a significantly higher pay rate for teachers with diplomas.

Under the offer, the top rate for those with graduate diplomas and masters degrees would rise to $85,481 by 2020.

Secretary for Education Iona Holsted said the revised offer was worth $698 million over four years.

That's an increase of $129 million from the previous offer, she said.

Ms Holsted said the offer also took into account the government's recent announcement of $217m over four years for 600 new learning support coordinator roles, which the NZEI had asked for.

The Ministry's package would cost about $700 million over four years.

'The government did everything possible to avert strike action'

Education Minister Chris Hipkins said the union had not been willing to compromise during mediation talks, and he was disappointed the strikes were going ahead.

"The government did everything possible to avert strike action. The mediator was very clear that the NZEI's claims were unreasonable and that the government's offer was a very, very good offer.

No more money would be put on the table for teachers, but the agreement could be "reconfigured" Mr Hipkins said.

But the union had taken the position that it wanted everything, and was not willing to compromise, he said.

What does the Employment Relations Authority say?

The authority has come down hard on the teacher's union and says its claim is completely unrealistic and is urging the union to take the offer.

The authority's chief James Crichton said the government's offer was "a handsome and competitive proposal in the current fiscal environment".

"My prevailing impression of this facilitation is that NZEI came into the process with a series of proposals which taken in their totality had an air of unreality about them".

When will other teachers be striking?

What about secondary teachers?

Secondary teachers are still holding paid union meeting which will run until 23 November.

They're currently deciding whether to follow in the footsteps of the primary teachers and strike.

But if they do, it won't happen until early next year.