When the British divers Rick Stanton and John Volanthen and caver Rob Harper arrived at Chiang Rai Airport, there was an awkward moment. 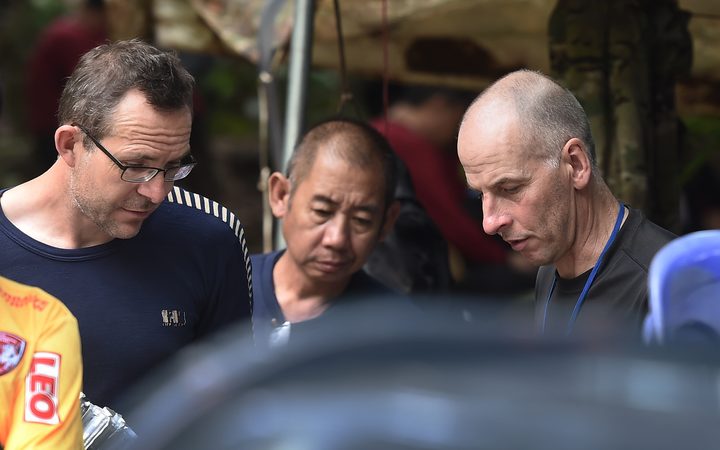 It's detailed in ABC's South-East Asia correspondent, Liam Cochrane's new book, The Cave, which reveals the lack of co-ordination that confronted the British divers when they first arrived in Thailand.

The men would eventually play a key role in the rescue of 12 boys after a fortnight trapped in flooded caves in July.

When they arrived at the airport, someone had made up a banner - something about them being the best cave divers in the world - and the three were asked to stand in front of it for a photo.

They did so, reluctantly; it was not the sort of claim these modest men would make and they were wasting time. But they'd just arrived and didn't want to be rude.

They had a briefing at the airport with Governor Narongsak Osottanakorn. The divers asked about the weather forecast and whether any of the boys had pre-existing medical conditions, and were surprised when that information was not known. One thing was made clear to them though: the military was in charge of the diving operation.

There were several government departments involved in getting the British divers to Thailand, and each agency had sent cars to drive the three cave rescue divers to Tham Luang, about 60 kilometres away. So in the end it was a convoy of about 10 vehicles that sped down the highway that Wednesday evening. They got to the cave about 8pm.

But after an urgent flight across the world and a race to the cave, the British divers were puzzled to be left to fend for themselves.

"We arrived on site and we were abandoned," John said.

"We had no real introductions, nothing. On that day, it was utter chaos, with people everywhere ...we were effectively left to our own devices."

They found Vern Unsworth, who took them to meet the diving supervisor, a military man stationed in the cave mouth. The entrance was theatrically lit, glowing orange from the metre-wide spherical lamp and other smaller lights. The soccer team's bikes still leaned against the hand-rail, a powerful reminder of the lives at stake. Below, hundreds of people swarmed around the cavern.

The first meeting between the SEALs and the British experts did not go well. The commandos had been working hard, well beyond their comfort zone, and bristled at the idea that John and Rick, "two middle-aged men" [John's words], could do something they couldn't.

Inside Chamber 3, the water level was now rising about 30 centimetres every 10 minutes. The military had ordered that all diving be suspended due to the dangerous conditions.

"The SEAL team didn't allow them to go in," said Pae (Ruengrit Changkwanyuen). "It was bad enough that the issue escalated up to the Ministry of Foreign Affairs. Eventually, Rear Admiral Arpakorn Yuukongkaew [the top SEAL commander] said, 'Just let them go.'

"Someone muttered, 'If they die in there, don't expect us to retrieve their bodies'."

Vern and Rob helped carry the air cylinders in with Rick and John. Almost a kilometre along, they came to an arch followed by a dip that was about waist deep. Rob helped them through the half-filled sump, into the forward operating base the military had set up in Chamber 3.

The water was rising up the cave wall, and Rob returned through the rapidly filling S-bend, so he wouldn't get trapped without diving gear. The SEALs and other Thais inside hurried to clear Chamber 3.

By the time John and Rick had their tanks and masks on, the lowest point of the cave had fully flooded. They dived into the sump and laid a line back through as a guide, securing their exit incase conditions worsened. The 4-millimetre-thick polypropylene material was similar to nylon but non-absorbent, with neutral buoyancy and strong when wet. It was the first in a series of guide lines through the cave that would come to play a crucial role in the diving operation.

"We stopped that night, because it was very clear the cave was flooding," John said.

The British divers emerged after midnight, re-joining Vern and Rob on the other side of the flooded dip. As they walked out, Vern predicted the cave would flood to the entrance in about four hours. It did exactly that, prompting an urgent evacuation of everyone inside the cave.

Earlier, before dawn that Wednesday, Major Charles Hodges got a call from his director of operations. They were stationed on the Okinawa military base, as part of the US Indo-Pacific Command.

"Awesome," he thought. "That's exactly the type of mission that we want to be called up for."

Hours later, a team of about 30 personnel from the Special Tactics Squadron at the Japanese base were loading up an MC-130 transport plane.

The Americans arrived at Tham Luang about 1am on Thursday and immediately assessed the situation, walking in as far as the floodwaters would allow.

"So we go into the cave, and it was completely dark. I'm walking in thinking this is so surreal," Captain Jessica Tait, an Air Force public affairs officer, told Four Corners. She would become the face of the US mission over the coming days.

"It's so dark. A few of us had headlamps. I did not, so I'm trying to tag along as close as I can to some of the other members of the team.

"But I could just sense, like, oh my gosh, there's 12 children and a coach in here, and I'm just in the entrance way and I'm spooked out."

The team's coach, Ek, was also starting to get spooked by the grim situation they found themselves in.

"The most worrying things for us were the darkness, the water and hunger. The water kept rising all the time. The darkness limited our awareness of whether we could survive in this shelter. Hunger was a big obstacle. When everyone was so hungry, it could cause conflict with each other."

Then a dark thought entered his mind.

He laughed at the paranoia that had seeped into the dank cave. It must never come to that. They knew someone was looking for them, they just had to be patient and stay alive.

More frustration for the Brits

The British team dragged their jetlagged bodies back to the cave about 10am on Thursday to try again.

One thing about their appearance immediately stood out: the inner tube that Rick wore as a buoyancy device. He called it his "lucky wing". It had been part of his kit on several successful rescues and had become something of a lucky talisman, as well as an in-joke.

But to anyone who didn't know these cavers, it may have branded them as amateurs. (When another diver saw it his first thought was: "These guys are going to get themselves killed.")

That morning, it was a struggle for Rick and John to even get into the water. They had already been delayed once, when they were asked to move their air compressor away from a building in which meetings were being held. They'd just set it up again, when the compressor fell silent. It was out of petrol.

It was a frustrating moment. These divers had pulled off some of the toughest cave rescues in history and had flown across the world to help, only to be thwarted by a few litres of gas.

Everyone around them looked busy and nobody seemed to care. But then a man wearing a yellow nametag - discreetly marking him as a representative of the King - approached to ask if they needed anything. A supply run to a local petrol station was arranged.

Rick and John finally dived into the first murky pool about 11am. There were now three separate flooded sections before Chamber 3 - a 15-metre sump, another about 10 metres long and the S-bend, which now involved about five metres of diving.

The water was pulsating, the result of it being forced with considerable pressure through narrow passages and into more open "swirl chambers" like Chamber 3, creating thrumming eddies as it continued to rise.

Finally, movement in the dark

The British divers surfaced and in the darkness they sensed movement. For a moment they thought they'd found the Wild Boars.

But as their lights focused, they were astonished to find four men - Thais from one of the pumping teams. They'd been working in the cave for two days and on Wednesday had decided to take a nap in a quiet corner of the large sandy chamber.

"When I woke up I thought to myself, 'Why is the cave half-flooded?' So I ran out to look towards the entrance," said Surapin Chaichompoo, the president of the Thai Well Water Association, in an interview later.

"I looked back and ran to the high mound where we were sleeping. It turned out everyone had gone and it was only the four of us left. I told my guys, 'Wake up, wake up'."

Somehow, in the rushed evacuation, nobody had noticed the missing men.

They spent the night inside Chamber 3, hoping that the water level would go down and they could escape. On Thursday morning, the men heard clanking sounds from the water. Surapin threw a rock towards the sound, trying to attract attention.

The clanking got louder but there was no human response. So he threw another rock. Then he saw torchlight under the water and the divers surfaced.

The foreigners were stunned.

"OK, oh my god," one said, according to Surapin.

The British divers had to temporarily abandon their search for the Wild Boars while they rescued the rescuers.

They took it in turns. "I put one guy under my arm and then essentially dragged them out through one sump," said John, "then returned with my mask and Rick and I swapped."

The Thais tried to assist, swimming in the right direction, as the British divers held them with one hand while the other hand felt along the line they had installed the previous evening. But any movement by the men was counterproductive.

"We both realised how difficult it was to do that [even] with people who were trying to help, over a short sump," said John.

It took up precious time, but they had no choice - these, too, were lives that needed saving.

Military hushes up the rescue

Bizarrely, the Thai military initially tried to deny the incident, even to the divers who had just experienced it.

It was only later, when the American military backed the British divers' story and brought over a senior military man to hear the details, that the Thai top brass begrudgingly admitted that the impromptu rescue had in fact taken place.

For the four members of the pumping team, there was no doubt about the role John and Rick had played.

"I really owe my life to these two divers," said Surapin.

"You have to understand that these foreigners have a bit of crazy in them. They like to do crazy things. But they are very good at diving."

One of Surapin's colleagues said the close call had a lasting impact: "If you want me to go up a tree, I'll go up a tree ...but no caves any more, they're scary."