The first footage has emerged from the hospital where 12 Thai boys and their coach are being treated after their dramatic rescue from a flooded cave. 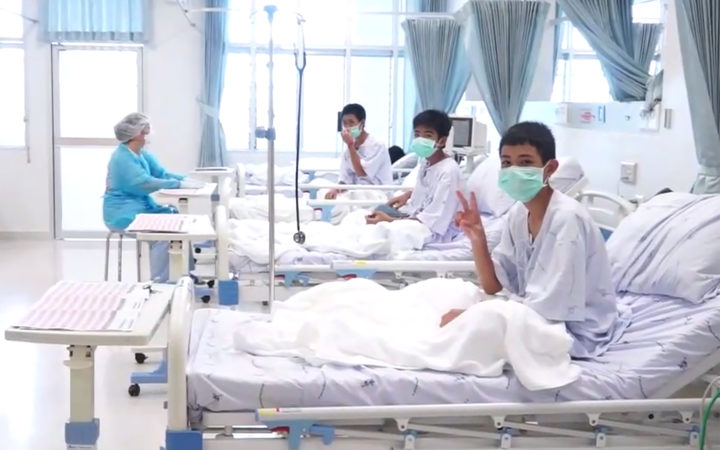 Several boys can be seen in facemasks and hospital gowns, at least one giving a victory sign for the camera.

Meanwhile, reports say the boys and the coach were sedated to stop them panicking during the dangerous rescue.

Divers who took part in the operation said the boys were heavily sedated to avoid anxiety as they went through the dark, narrow, underwater passageways.

Former Navy seal Chaiyananta Peeranarong told AFP news agency: "Some of them were asleep, and some of them were wiggling their fingers, kind of groggy - but they were breathing. My job was to transfer them along."

Each boy was strapped to one of two rescue divers tasked with shepherding him, and bundled onto stretchers to be carried through the dry parts. 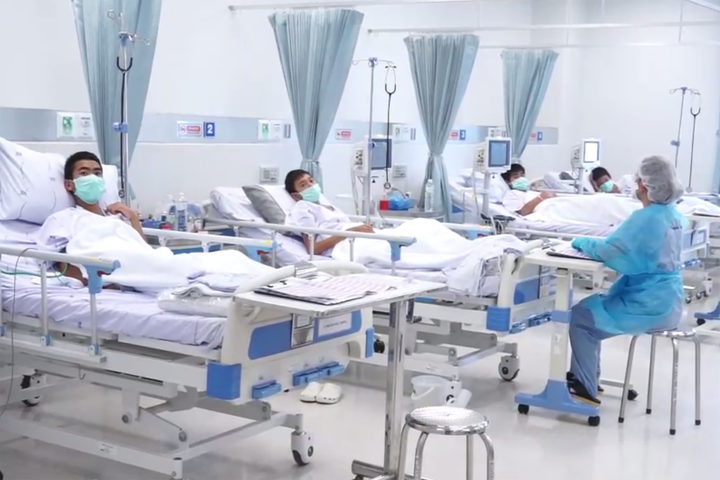 Earlier on Wednesday, the head of the Thai Navy Seals told the BBC that "hope became reality" with the rescue of the boys and their coach from the Tham Luang cave.

"We had a little bit of hope that they might still be alive but we had to do it, we just had to move forward," Rear Adm Arpakorn Yuukongkaew said. "There was only a tiny bit of hope, but that's all we had to work with."

The group was trapped in the cave by rising water and rescued in a dramatic operation that captivated the world.

The complex, three-day rescue saw four boys emerge on Sunday, four on Monday, and the final four boys plus their coach on Tuesday. They survived the nine days before they were found by drinking water dripping from the cave walls, officials said.

The boys lost on average 2kg during their ordeal but are said to be in good physical condition. They will remain in hospital in the nearby city of Chiang Rai for a week, followed by a week's recuperation at home.

The first four boys have already been visited by their families, officials said, and the others will be allowed to receive visitors soon.