Dunedin is expecting its biggest tourist season yet with close to 120 cruise ships and countless campervans descending on the city during the warmer months. 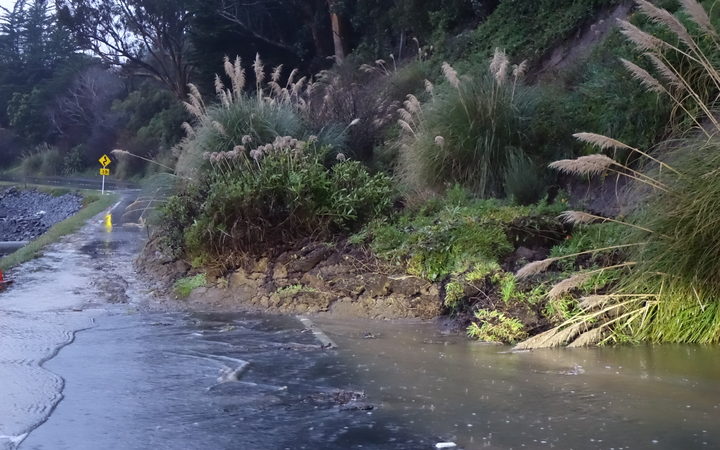 But one of its drawcards - Otago Peninsula, home to the royal albatross, little blue penguins and seals and sea lions - is being disrupted by a massive roading project.

It is hoped the Peninsula Connection will eventually link Portobello to Port Chalmers for cyclists and pedestrians.

But it will also create a much wider road which is safer for locals and tourists.

Work began on the $50 million connection earlier this year, and on Monday 5 November, work on the latest section of the project started.

Stop-go signs mark what is known as the low road - much of which sits unsealed - and the high road is closed following slip after slip in recent years.

But with the tourist season just around the corner, businesses are preparing for some short-term pain for long-term profit.

"It is a painful exercise for sure," Portobello Hotel owner Sarah Cunningham said.

"But you've got to think at the end of it, it is going to be so beneficial to us that you've just got to ride it out."

Her business sits about half-way along the peninsula and will bear the brunt of disruption during the construction period.

But the pot of gold at the end of the rainbow will be a shared cycle and pedestrian path, which it is hoped will eventually link the 30 kilometres between Portobello and Port Chalmers on the other side of the harbour.

"We can only hope and imagine what that's going to do. But I've spoken to other places like Greytown, where the cycleways come through there and they've said it's just been amazing for them.

"Unfortunately for progress to happen sometimes you've just got to weather it through."

She was not alone in her anticipation.

Natures Wonders owner Perry Reid said the project was a boon for the peninsula's tourism prospects, as well as the locals.

"There'll be a little bit of disruption - we know that. But I applaud the council and the government completely for putting in the money and infrastructure for it.

"There's an old saying: 'You can't make a great cake without cracking eggs.'"

Councillor Christine Garey, herself a peninsula resident, said getting the roading upgrade was hard fought, and the benefit would not only be greater tourism for the area.

"It's a safety improvement project and it's part of the safer journeys' philosophy - if people make a mistake while driving it shouldn't cost them their life.

"Added to that we were able to get a walkway-cycleway. The cycleway was an add-on, so that certainly wasn't the primary focus, but it's going to add amenity for the community."

Last year, a tourist cycling on the peninsula was struck by a campervan and seriously injured.

Many locals had feared it was only a matter of time until someone was killed on the road, and there had been incidents of tempers fraying between cyclists and motorists.

Dunedin City Council group transport manager Richard Saunders said the council was working with tourist operators and locals to ensure disruption was kept to a minimum this summer.

There will need to be a little bit of patience while the work's going on but I think the result will certainly be worth it."

The project was on track to be completed in 2021, he said.