Primary school teachers and principals will strike again next month. 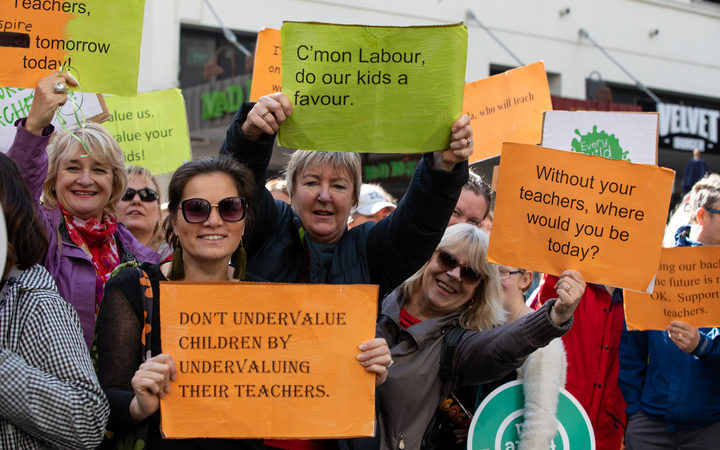 The teachers union (NZEI) says a rolling strike will begin on 12 November in the Auckland region, and continue around the country for a week.

The strikes follow a national strike in August, and members' rejection of a second offer last month.

The NZEI's lead negotiator Louise Green said the unprecedented level of industrial action shows there's a crisis when it comes to recruiting and retaining teachers.

The Ministry of Education said it and the union will urgently seek facilitated bargaining, to help reach a settlement for primary principals and teachers.

NZEI Te Riu Roa president Lynda Stuart said that while strikes will go ahead "we have agreed to continue to try to seek a resolution.''

The union and the secretary for education had committed to seeking an agreed settlement before the strikes started.

"Tomorrow, both parties will jointly refer the collective bargaining to the Employment Relations Authority for urgent facilitation."

"We're in a crisis point for recruiting and retaining teachers in our country.

"It's impacting on childrens' learning right now, and what we're seeing is that the huge workload and the lack of resouces for children who have additional learning needs is actually driving teachers out of the profession," Ms Stuart said.

Teachers sought a 16 percent pay rise over two years, but that was open to negotiation.

And, it was important teachers got a package that supported them.

The union had agreed to enter into a facilitation process with the ministry.

Ms Stuart said the government had the power to stop the strike going ahead, by looking at its purse, and finding the extra things teachers needed going forward.

She thanked parents and the community for the support they'd given teachers and principals.

Parents understood the decision to strike was not taken lightly, she said, and had seen what happened in schools when they did not have enough teachers.

Education Minister Chris Hipkins said there was still a lot of water to go under the bridge before the strikes, and the Government was pleased the union and ministry were seeking facilitation.

The union said teachers and principals were asking for smaller classes, more resources, and an increase in salaries of 16 percent over two years.