New Zealand scientists may have found a chemical that could reduce the number of redback spiders in the country. 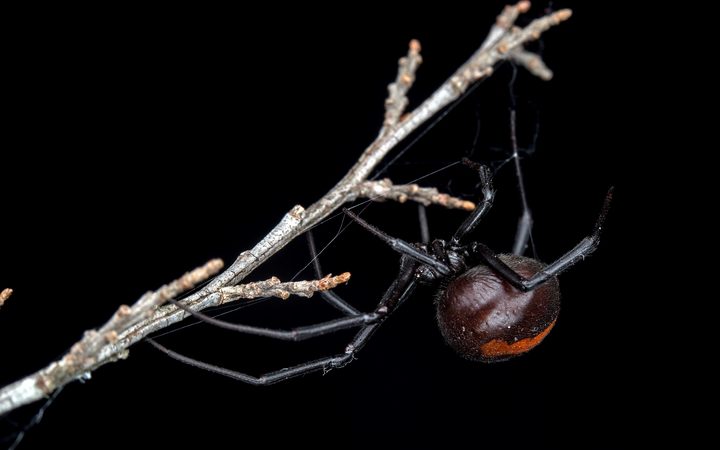 Redback spiders have a venomous bite and could spread from Central Otago and New Plymouth to other parts of New Zealand. Photo: RNZ

Canterbury Museum curator Cor Vink said redback spiders were found in Central Otago and New Plymouth, but there were concerns they could spread to other parts of New Zealand.

Scientists have discovered that chemicals on the silk of virgin female redbacks can be used to trap and kill their male counterparts before they mate.

Dr Vink said the new discovery could be the basis for developing a way to contain redbacks.

"We can't use sprays as they will kill the endangered insects that we are trying to protect," he said.

"Using a biological control, such as parasitic wasps, won't work either as they would also attack katipō, which is endangered and very closely related to the redback."

Dr Vink said they were planning to develop a reliable pheromone trap, which they could use to attract and capture male redbacks.

"While our work has shown that male redback spiders are attracted to butyric acid, further work is need to identify the quantity and ratio of a chemical or chemicals that could be used in a pheromone trap.

"Our aim would be to create a sufficiently strong chemical attractant to prevent mating in an entire redback population."

Redback spiders are highly venomous and are believed to have originated in Australia, but have been found in New Zealand since the early 1980s.

They are members of the cosmopolitan genus Latrodectus, the widow spiders.

Adult females have spherical black bodies, with a prominent red stripe on the abdomen.

The body length of females is about 10mm and the bodies of male redbacks are 3 to 4mm long.