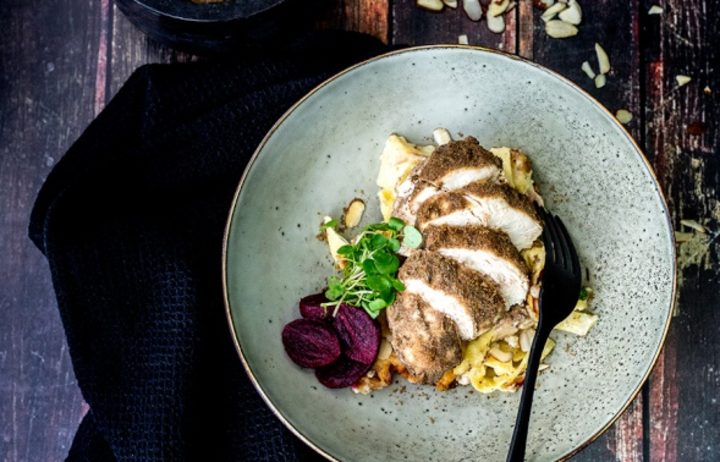 Muscle Fuel has added a 'Chirpy Cricket Chicken' option to their menu for a limited time. Photo: Muscle Fuel

Muscle Fuel has added a 'Chirpy Cricket Chicken' option to their menu for a limited time. It consists of a chicken breast covered with cricket flour crumb alongside fettuccine bacon, potato and baby beets.

Muscle Fuel chief executive Hamish Coulter told Morning Report that the idea for the unique meal was brought in time for Halloween.

"We're always looking for something a little bit different. We watch international food trends quite closely and we've noticed that cricket flour has started to make an impact on other markets so we thought, why not? Let's give it a go."

He said spiders were also considered to suit the Halloween theme but crickets were a better alternative for now.

"We didn't want to go full steam into it, we wanted to test the market and see what people thought."

It is seemingly disguised in the meal with the equivalent of three crickets sprinkled on top of the chicken, alongside sliced almonds to suit the flour's "slightly nutty taste".

"It's a little bit firm, a little bit crunchy. We've also put sliced almond in the meal, just to throw people off a little bit. It's kind of like flour and it does bake like a crust."

"It's really great for health, high in protein, high in fibre and iron."

Mr Coulter said they have had a 100 orders for the meal so far and received mixed reviews.

Innovation is not new to the company, earlier this year they created a dish using native New Zealand kawakawa to celebrate Matariki.