Deer milk is proving to be a roaring success - perfectly mixed in luxury desserts, coffee and even cocktails. 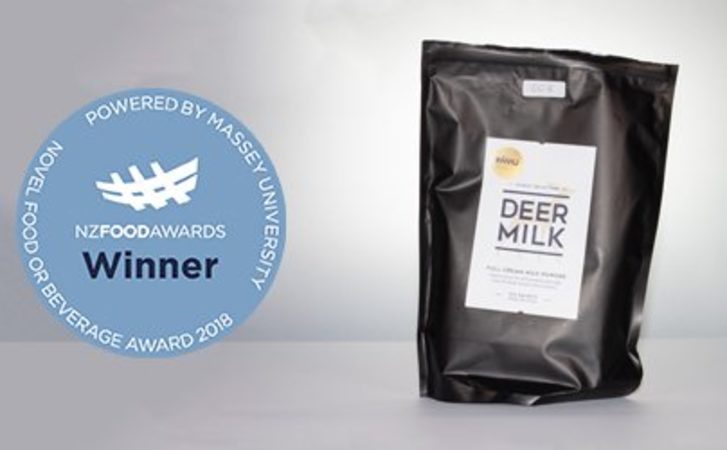 Deer milk from Pāmu Foods has won a prize for the most novel product. Photo: Supplied

Pāmu Foods won the prize for the most novel product with its deer milk at the New Zealand Food Awards last night.

While it may not be the go-to product to buy, apparently it's perfect in luxury desserts, coffee and even cocktails.

"It's a fantastic milk, It's very light and delicate on the palette but it's rich in protein and fat," Pāmu general manager Sarah Risell said.

She said deer milk was versatile and created opportunities for innovative and new recipes.

It had some lactose but the content of it was lower than normal milk, she said. However, it is not suitable for infants or toddlers.

Ms Risell said the idea for it all started out on a farm in Gore by the McIntyre family.

She admitted it was a lot harder to milk deer than conventional cattle.

"Well the McIntyre's have just a wonderful affinity with their animals and so much care," she said.

Ms Risell said the company was supplying deer milk to high-end food services and the plan was to export the product overseas.

"That's what we spend a lot of time preparing for," she said.

RNZ's Guyon Espiner gave the product a try on Morning Report today and you can listen back to what he thought.