A polluted stream just south of Christchurch had its second round of what will become annual wildlife monitoring this week. 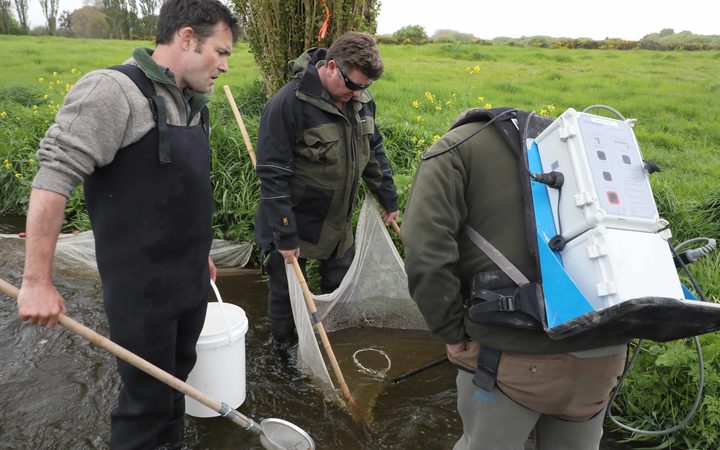 Snake Creek is part of the restoration of Silverstream catchment - 1500 hectares of land that is mostly made up of farms.

High E. coli levels have been found coming from the catchment, but a single source could not be identified so the councils and community are working to restore all the streams in the area.

They regularly monitor the health of the waterway to see if what they have been doing has had a positive effect on the habitat, she said.

"Every quarter we measure the water chemistry, like the nitrates, phosphates, E. coli and flow.

"Then this is the annual monitoring round. We get a bit more in-depth and we look at the bugs and the fish."

Mrs Arthur-Moore said the data was still being analysed but this year they found native species like long-finned eels, bullies and freshwater crayfish, as well as some one-year-old trout.

Fish and Game officer Steve Terry said Snake Creek was one of a lot of streams that need the same sort of restoration work done.

"It's more a trial to see what the best way to do it is and I think it's turning out well. Hopefully it works, but time will tell I guess."

Environment Canterbury's senior ecology scientist Duncan Gray said despite this only being the second monitoring year for Snake Creek, the physical change in the stream was incredible.

"It's a completely different waterway. How that change reflects in the invertebrates and the fish . . . that's the million dollar question."

Dr Gray said the collaborative restoration of the entire catchment was a huge experiment in many respects.

"But if we're going to succeed in achieving healthy lowland streams across Canterbury, these are the techniques we need."