Questions have been raised about the quality of new police after four recruits were stood down for misconduct in the past year. 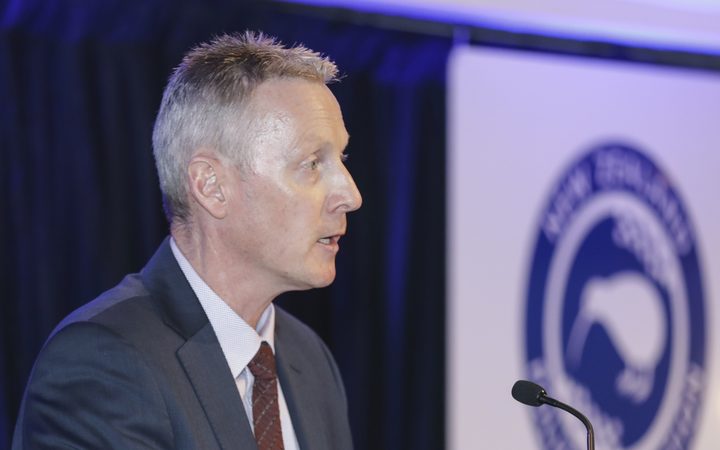 Police Association president Chris Cahill says he is unhappy a recruit who came top of his class has been hung out to dry by the media, without all the facts being known. Photo: RNZ / Rebekah Parsons-King

Two of the new recruits are the subject of criminal investigations.

Police would not say what exactly the recruits were alleged to have done, nor when the investigation would be completed.

It was understood the recruits were not on duty at the time, and three of the incidents happened off-campus.

General manager of training Superintendent Scott Fraser said if any of the allegations against the four were upheld, it could jeopardise their ability to graduate.

"Four individuals have been stood down over the last twelve months," Mr Fraser said.

"Just to put it in context, there are 940 recruits that have trained and four are currently stood down and whilst I can't talk about the individual circumstances, we do not graduate anyone who does not meet our standards."

In a separate incident, which was also investigated by police, up to six recruits from an intake which graduated last month were caught drinking in their barracks.

They were allowed to graduate, despite their behaviour falling below what was expected.

"I'm assuming what happened is the superintendent of the college, who is a very fine man and has been doing this for a long time, made a judgement call that the recruits have learned their lesson," Mr Nash said.

"He wasn't going to be the one that bought their career crashing down around their ears.

"They learned their lesson and they will go on to be great officers."

The officer who graduated at the top of his class in that intake was also investigated for misconduct.

Police Association president Chris Cahill said he was unhappy that the high-achieving recruit had been hung out to dry by the media, without all the facts being known.

He said the matter was investigated, but there was insufficient evidence and no further action was taken.

"I know police hold officers to a higher standard than any other employer in New Zealand, so clearly for him to graduate, and to graduate at the top of his wing, he's got some outstanding attributes and I think it's a shame he's been hung out to dry," Mr Cahill said.

Now, questions are being raised over whether a government push to get an extra 1800 officers on the streets has come at the expense of recruit quality.

National Party spokesperson for police, Chris Bishop, said it had.

"This is just the natural consequence of a desire to go absolutely hard on quantity, and I suspect it has come at the expense of quality," Mr Bishop said.

"We are not dropping the quality or the standards of recruits coming into the New Zealand Police service," he said.

"We need good, high quality people serving our communities and I think we're getting those."