The Marist Fathers has admitted a priest who led one of its top secondary schools sexually abused children. 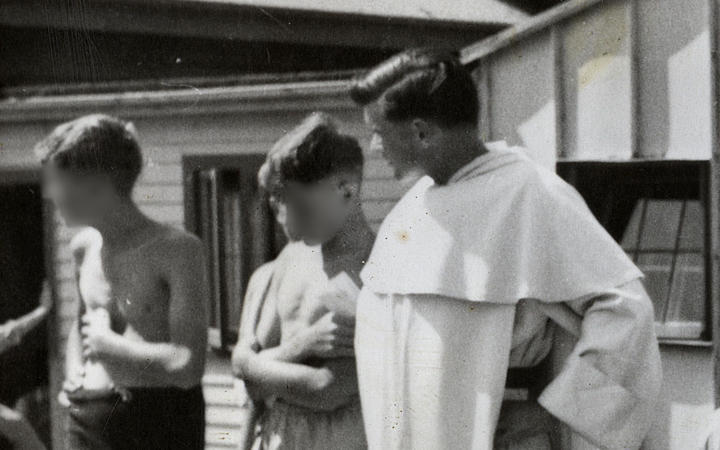 But decades on they will not release the file on Francis Durning, rector of St Patrick's College in Silverstream, Upper Hutt, in the 1950s.

He was publicly remembered in Catholic obituaries as a man of "profound integrity" but a victim said other clergy nicknamed him "Fred the Fiddler" for his habit of abusing boys.

The victim, who RNZ will not name, is now in his 70s. He was a 13-year-old boy when the head of the school asked him into his office.

"He grabbed me and proceeded to hug me against his body," the man told RNZ.

He fled. The retaliation later from the rector and other staff, who knew abuse was going on, ruined his schooling, the man said.

Head of the Society of Mary, David Kennerley, which is Marist Fathers' governing body, said the abuse was "criminal".

Nine years on, he has got neither.

"I believe that most survivors would take the money and go away. Remain in isolation, remain with some degree of guilt.

"I believe it's part of the cover up to protect the Marists and the college. His file would be something we could use to reveal to other victims so they can stop becoming victims.

"A victim needs to be able to speak out and be believed. And so I believe there are other victims abused by Durning who have not had the chance to speak out because they may believe that they're the only ones." 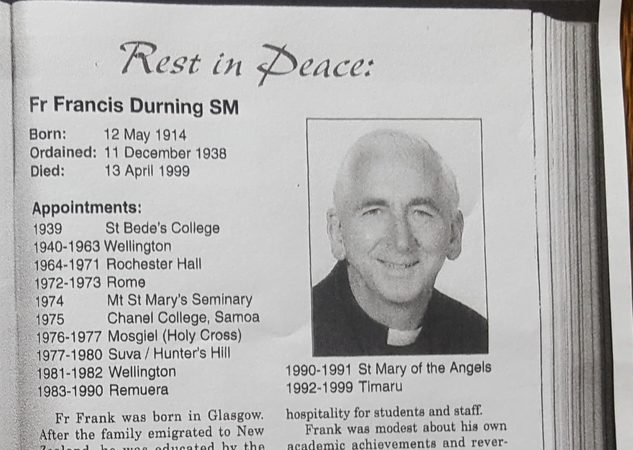 He knew of two other boys who were abused by Durning, he said, and of suicides that might be related.

A brief Marist report, obtained by RNZ, notes two similar complaints but gives no details of when or where. Mr Durning moved around a lot, including throughout the Pacific.

Police are understood to be interviewing St Patrick's College old boys about other historical abuse there, though police would not confirm this.

The school had other abusers: Alan Woodcock, nicknamed Penis Radiata, was jailed for seven years in 2004 for attacks on 11 boys; Michael Shirres, the celebrated theologian, was exposed by the New Zealand Herald as a paedophile.

A photo shows Shirres and Durning together with shirtless boys at the school's sports day in 1955.

Father Kennerley said he was now considering releasing 100 pages of Mr Durning's file that related just to the victim who was now speaking up. But, in general, it was not his group's policy to release information, he said.

"If we release a file, the whole file of a man, I see incredible potential to harm other people who have come forward."

However, he agreed others' names could be blanked out from such files.

"Where there is evidence that there might well have been criminal behaviour, can we take that along to police? It's a question I'd like to put to lawyers."

The church said it encouraged victims to lodge complaints with the police.

Father Kennerley said he would alert the head of the Marists' Oceania about Mr Durning when they meet in Rome this week, given the priest taught in Samoa and Fiji in the 1970s.

The victim said the church's leaders lacked the courage to do what was right for victims of Mr Durning and other abusers.

"I know the individuals involved - they wouldn't be strong enough to carry out their own inquiry.

"After five decades of covering up I don't believe these men are strong enough to get together and say, 'Right, we're going to expose this'. "

The school's response to an Official Information Act request was that it had no record of any inappropriate relationships between Mr Durning and students or staff.

Society of Mary's sexual abuse contact person, Judy McCormack, who was on the protocol committee which dealt with the victim, did not respond to repeated attempts for an interview.

A top Marist priest who dealt with the victim's original complaint in 2002, Tim Duckworth, denied the victim's assertion that he told him that Mr Durning's nickname was Fred the Fiddler.