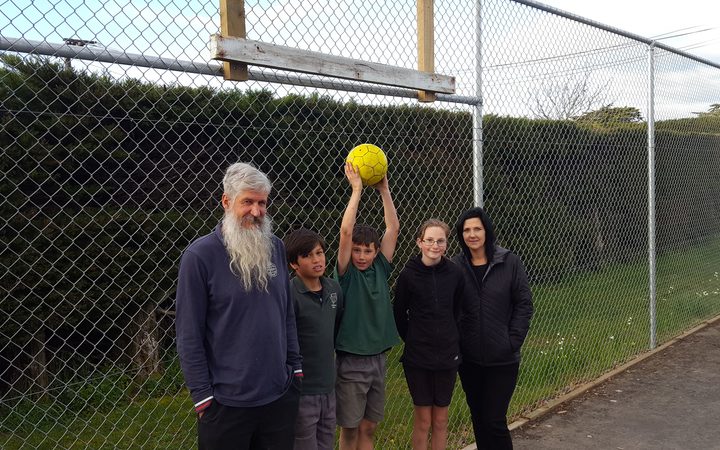 The decision by the Selwyn District Council was taken after a teenager in Auckland decided to hang from the rim of a hoop, causing it to detach and land on him which left him seriously injured.

Selwyn Huts' hoop was removed by the Selwyn District Council in June, just three weeks before the start of the basketball season, due to fears of a repeat of the Auckland incident.

For keen basketballers, Malachi and Giselle Braxton and Petelo Morrison, it had put a major dent in their time spent practising their free throws and lay ups.

Giselle's mum was now re-considering whether to get her a basketball for her birthday.

"I really wanted a basketball but we've got no hoop."

The next closest hoops were about 10km away in Lincoln or Springston, leaving Malachi and Giselle's mum, Loren Braxton, to wonder why the council could not have made a temporary one available while it sorted out how to make the old one safe.

None of the children at the huts were anywhere near tall enough to reach the hoop, let alone hang from it, she said.

"I'm surprised that anyone came down and it just sounds like one of those freak accident type things. It doesn't sound like it's a regular [often] thing that goes on."

Selwyn Huts was one of three small rural settlements to have its hoop removed after the council called in a structural engineer to carry out assessments of 16 hoops in the district.

The head of Canterbury Basketball, Paul Duggan, said the slam dunk incident in Auckland that prompted their removal was extremely rare and apart from Auckland he had never heard of anything similar happening in New Zealand.

"Given there's only a small subset of the population that have the physical ability to actually jump up and dunk the ball, I think they are sort of penalising a large part of the community and the kids who do want to play and aren't doing that, for a small subset that are stupid enough to want to hang on it."

Earlier this year, the Auckland Council carried out safety checks on all of its hoops and found none of them posed a risk.

RNZ News approached Christchurch, Wellington and Dunedin councils to find out if they had pulled down any of their hoops due to safety concerns.

None of them had.

Selwyn District Council property and commercial manager, Douglas Marshall, said the $15,000 checks were done based on media reports of the Auckland incident.

He wasn't sure if Auckland Council had been contacted before his council decided to check its hoops.

"Other organisations might have a view that they don't need to go to that cost. We think it's well worth the spend to bring it up to the standard that means parents can be comforted that their children are playing in a safe environment."

Staff reports talk about the three communities having to wait more than a year to have their hoops replaced.

But Douglas Marshall said steps would now be taken to get safer spring loaded hoops in place before Christmas.

"We will move some budgets around to make that occur in the coming months. We have a bit of flexibility in that regard. Ultimately it's a safety issue and we'll make the money available to replace [the hoop] with a compliant basketball hoop."