Wellington City Council has unveiled the inner city apartments, which will be part of a new renting model. 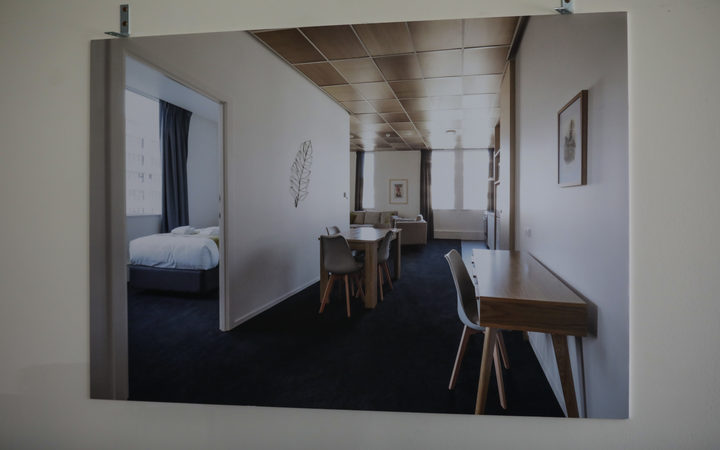 Thirty-five apartments leased by the council will be rented out to city Wellington city workers for less than the market rate. Photo: RNZ / Richard Tindiller

The apartments are a joint venture with the council and developers, The Wellington Company, which will be built by converting the Freemason House office building on Wellington's Willis Street.

From mid-2019 it will become the apartment complex, Te Kainga Aroha and home to around 100 tenants in 35 one to three-bedroom apartments.

The apartments will take up five floors and the council insisted they will be cost-neutral, meaning ratepayers would not be out of pocket.

Mayor Justin Lester said the apartments would be affordable for middle-income workers.

Mr Lester said the houses would be available for workers who were employed in essential services in the city.

"For nurses, for teachers, for policeman, for firemen, for people who are earning reasonable middle income but still struggle," he said.

The council is leasing the building for 15 years, meaning tenants can stay for much longer than the usual one year lease.

"It's very very tough, so the low supply of rentals makes it very hard to find a flat, then once you're in it's very hard for renters to be able to assert their rights," she said.

Ms Mooney said she was looking for a house and finding a similar property in that price range would be difficult.

The apartments will meet the council's own Warrant of Fitness for houses.

The Wellington Company's Alex Cassels said the building has been strengthened to 80 percent of the new building standard.

"The only, way to achieve that [100 percent] would be to pull it down and start an start again, but in this case 80 percent is achievable, there's a lot of work to do, but we will do it," he said

Anything under 34 percent is considered earthquake prone.