Primary school teachers and principals are considering a new pay offer from the Ministry of Education of 3 percent a year for three years. 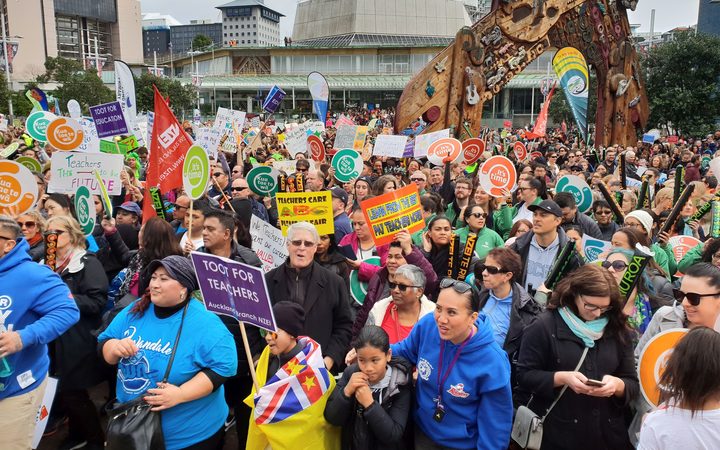 About 29,000 primary and intermediate teachers walked out of classrooms on 15 August in the first strike for 24 years. Photo: RNZ / Jessie Chiang

The New Zealand Educational Institute (NZEI) teachers' union said its members would vote on the offer in secret online ballots on 25 September, one week before its annual conference.

The offer followed days of negotiations and the first strike by primary teachers in 24 years last month.

The Secretary of Education, Iona Holsted, said the offer would cost $569 million over four years and provided a cumulative pay rise of 9.3 percent over three years.

"The new offer for teachers responds to the union's concerns the first offer was too heavily weighted towards new teachers and increases the quantum," she said.

Ms Holsted said principals of schools with fewer than 100 students had been offered a 14 percent pay rise over three years. The principal of a school of fewer than 50 students would increase their roll-based salary component from $81,553 to $92,976 by 2020.

Union president Lynda Stuart told Nine to Noon she would be making no recommendation to members about whether to accept or reject the offer.

"What we will be asking our members to do is to see whether or not it addresses the needs that we have or not," she said.

"Whether it will attract and retain teachers in this time where we have a crisis in teaching and a teacher shortage.

"Whether the pay issue will be enough when there is no significant change to workload, or whether or not it gives teachers the time to teach and our principals the time to lead."

The NZEI said the offer included no changes to class sizes and no additional support for children with special needs.

The union had entered negotiations with a claim for a 16 percent pay rise over two years, special education co-ordinators in every school, and smaller class sizes.

At the point at which teachers went on strike, the ministry had offered increases ranging from 14 percent over three years for new teachers through to six percent for experienced teachers.

If the offers were rejected there would be further consultation and NZEI members would make recommendations at their annual conference in early October about the next steps.