The most "dangerous road in New Zealand" has been left out of the government's $16.9 billion land transport programme, say Tauranga residents. 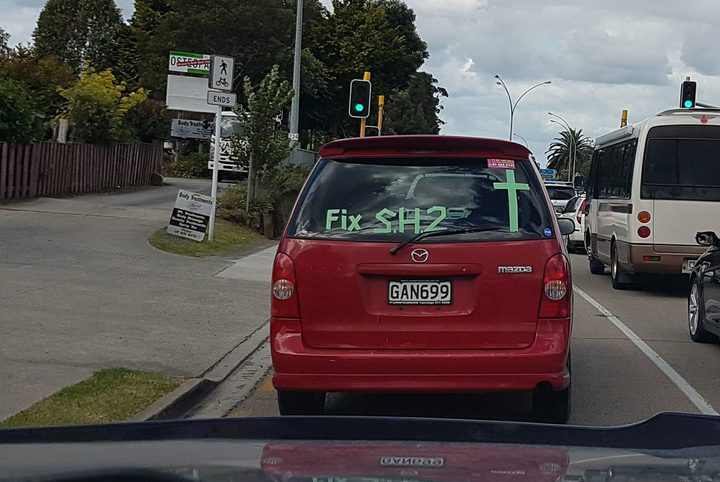 Yesterday, the government announced a $16.9b investment in land transport over the next three years.

But, founder of Tauranga lobby group Fix the Bloody Road, Andrew Hollis, said locals were frustrated the road north of the city was not prioritised in the government's long term transport plan.

The government's plan set aside $665 million for the Bay of Plenty, with half earmarked for road maintenance.  $65 million over three years has been put aside for safety work between Waihi and Omokoroa.

The work, focused on preventing head-on and run-off crashes, was expected to start immediately.

Minister Phil Twyford said safety was a top priority and the increasing number of people dying on Bay of Plenty roads was unacceptable.

But Mr Hollis said the community was constantly on edge living near the stretch of State Highway 2.

"One of the things whenever there's a fatality is people's phones suddenly go crazy to try and find out who's involved and whether it's someone we know.

"Anyone who lives near the sirens of Te Puna or Omokoroa has that weird cold feeling and shudders every time that siren goes off and at the moment it's going off every day."

Mr Hollis said most of the work to extend the highway to four lanes with median barriers had already been completed.

"It's almost paid for, the land is bought, all the road plans are in place, the geo-tech work has been done. They were just getting to the point of compacting the swamps in February when the Minister stopped the project.

"It is literally just tar-sealing the ground and putting concrete barriers up.

"It's been ready for a decade - we don't care which government finishes it. We just want it done."

The government announced $3.5b for new state highway projects from Puhoi to Warkworth, at Transmission Gully, on the Mt Messenger bypass, the Manawatu Gorge replacement, the Waikato Expressway, and the Christchurch Southern Motorway.

However, Mr Shirley said projects such as the East-West link in Auckland and from Tauranga to Katikati in the Bay of Plenty were urgent and should have been included.

"If you go round the country, there's the four-laneing from Auckland to Whangarei, the East-West connection in Auckland was the highest priority that's right off the radar now. Otaki to north of Levin, that's on hold. Christchurch to Ashburton including the new Rakaia bridge, it seems all that's on hold," he said.

"The Tauranga to Katikati, a very dangerous road, one of the highest increasing volume roads in the country and fiddling with that in minor adjustments won't cut the mustard - the earlier proposal for a substantial highway is required there."

Mr Shirley said the government's pledged commitment to road safety was a good sign, but the greatest road safety improvements would come from investing in new highways.

"The biggest safety gains actually come from the big highway investment projects - the Roads Of National Significance - they have delivered spectacular improvement in safety and they're the very projects that are now on hold."

"Road users from across the country are going to be out-of-pocket to pay for trams along Dominion Rd in Auckland.

"The government has confirmed the $5b take out from the state highway improvement fund and that just really short changes the Kiwis along the 11,000km of state highway network around the country."

"The government claims to be focused on safety but if they truly were about that, then they'd be building more of those well-engineered roads, not just looking at some makeshift changes," he said.