Some Wellington commuters left stranded by bus network changes have been given free Uber rides paid for by the Greater Wellington Regional Council. 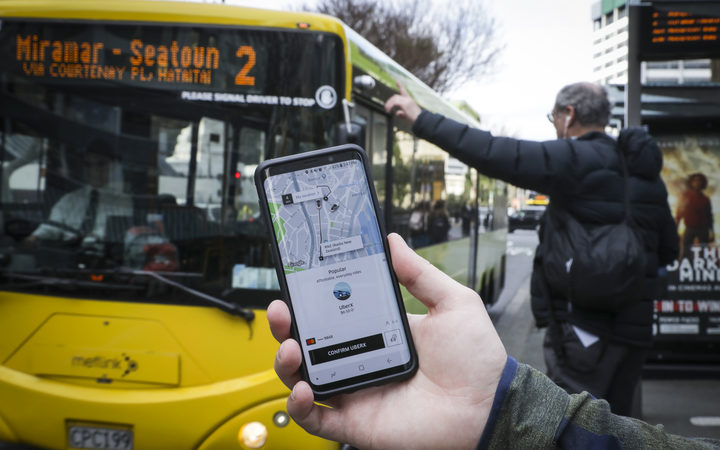 Greater Wellington has funded a limited number of Uber fares for people with significant needs such as the elderly while they rectify their timetable and route issues as a result of recent changes. Photo: RNZ / Rebekah Parsons-King

Wellington's network underwent radical changes in July, and the teething issues passengers have experienced are yet to ease.

As a result, there have been rare situations in which Greater Wellington staff members have booked Ubers for passengers who were in for a lengthy wait.

Greater Wellington spokesperson Stephen Heath said the organisation has placed council officers and contractors at selected bus hubs, and they are permitted to book Ubers in certain situations.

"Greater Wellington has funded a very limited number [of Ubers] in situations of significant need - such as for the elderly, for people going to hospital and so forth where the passenger was in for a considerable wait for the next bus," Mr Heath said.

"It's not a service we generally offer and it will cease once our promised improvements are made to the new services, people become familiar with them and we are confident that someone in great need won't be significantly disadvantaged by the roll out."

Mr Heath said the council made the decision early on to provide as much support as possible around the city, given the disruptive changes made to the bus network.

The staff they have placed at bus hubs in Kilbirnie and outside Wellington Hospital are trained in conflict resolution and dealing with angry people.

On Wednesday morning, two staff members in Newtown were guiding passengers to the right buses, updating them on when their bus would arrive, and even walking people to the hospital under the shelter of an umbrella.

"In addition to extensive advertising and online and printed information, we provided personal assistance to passengers," Mr Heath said.

"[They are] providing information on the new bus routes and generally helping people to get to their destinations.

"It's a service we will continue to provide for a while yet, we have no cut-off date."

Mr Heath said reactions at bus stops has been mixed but they are "universal in their thanks for the help we provided at roll out and continue to provide".

Justin Hall, a former bus driver and now regular passenger, said having staff at the bus stops can be helpful.

"But they can't be at every bus stop. They can't help everyone out," he said.

"They can't help that. Particularly for elderly people.

"It doesn't fix the situation. It doesn't solve things. They need to fix the teething problems and get things back to normal."

An Uber driver, who did not wish to be named, said he caught the bus into Wellington from Miramar for his studies.

He had noticed more people turning to Uber to get to work, rather than waiting around for a full bus.

"The new routes. Nobody has figured out the new routes so far, so they try to be safe by taking an Uber."

Despite the issues with the service, and some passengers saying they've turned to Uber or taxis as an alternative to the bus network, Mr Heath said patronage is steady.

He said the network carried about 90,000 journeys each day and there had been no fall in numbers since making the changes.