Homes were damaged when a tornado roared through a New Plymouth suburb last night and another hit Ōhope in the Bay of Plenty.

So why do they happen? 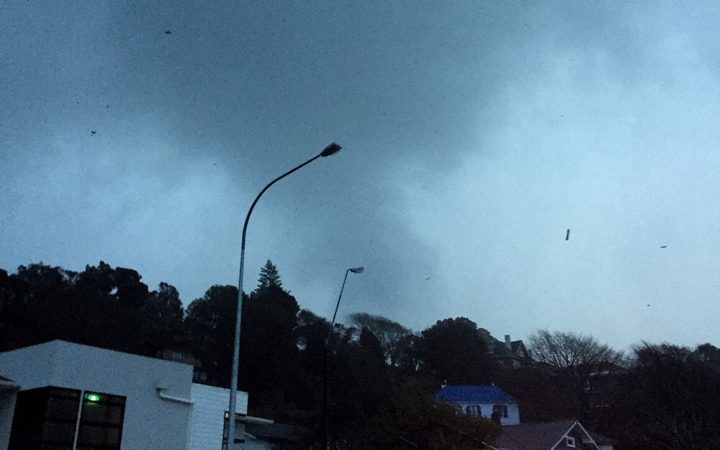 To produce a tornado there has to be a couple of different weather conditions. Most importantly, a strong, turning wind and a thunderstorm.

"Tornadoes usually occur with thunderstorms and have to do with how the wind turns with height. This is called shear - the turning of the wind and how it speeds up as it heads up into the atmosphere," says April Clark from MetService.

"When you have thunderstorms accompanying this, that gives a really strong updraft and that creates that very distinctive corkscrew effect of a turning tornado."

Colder downdraughts of air help to bring this tunnel of rotating wind towards the ground.

The twisters are only called tornadoes if the funnel shape, or corkscrew, touches the ground.

Why are they so often in New Plymouth?

The shape of the Taranaki coastline explains why they're so likely to happen in New Plymouth.

"It's all to do with that low-level shear, when winds come up to that coast," says April.

"In the case of New Plymouth, it's nor'easterly winds that slowly turn nor'west.

"When it's coming up against the land the wind starts bunching up or building up and that's where you start to get that turning.

"Particularly in New Plymouth it's because that coastline just has a perfect topography or shape that allows and enhances that turning of the wind at a low level in the atmosphere."

New Plymouth also sees a lot of thunderstorm activity and, as it's a coastal area, it is "always close to where the predominating winds are coming from."

Was this a bad one?

Although the New Plymouth tornado caused damage to a number of properties, it was relatively weak.

Tornadoes are measured on the Fujita scale of intensity, which is mainly based on how much damage the tornado causes. The scale goes from zero, considered light damage, to five, 'incredible damage'.

The New Plymouth tornado was most likely a Fujita one event, April Clark said.

"Usually New Zealand only gets to three, so one is definitely on the low scale in terms of damaging. In the US and places that are more continental they can get up to five but we never really see that here."

Will we see more in New Plymouth?

"We are expecting a chance of thunderstorms again, especially in that Taranaki coast today, and with that tornado risk as well, so it could happen again today."

MetService has a number of weather warnings in place.