A woman who suffered severe pain, bloating and hair loss after being fitted with a sterilisation device is disgusted no one is being held accountable. 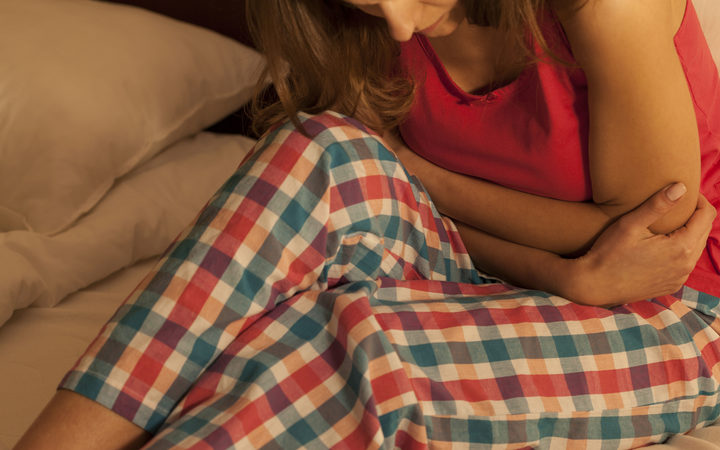 Nicole Rockhouse had an Essure implanted in 2014, because after four caesareans, she was told there would be health risks if she fell pregnant again.

Essure is a permanent contraceptive device, where two metal coils are inserted into a woman's fallopian tubes.

Ms Rockhouse said Essure was described as a quick and easy option for women who did not want to have any more children, but even insertion of the device was painful and not what she had been led to expect.

She suffered some health problems straight away, but tried to ignore them. A year ago the pain became constant and she often had to go to bed with heat packs on her stomach.

Ms Rockhouse said the bloating also became so bad she looked like she was six months pregnant.

"I couldn't touch the skin on the left side around my ovary area. It hurt to walk on that side and [there was] just severe pain. My hair fell out.

"I had a skin sensitivity on my face, so anything I put on it, if I went out in the sun or got too hot my skin flared up and looked like I'd been burnt."

Ms Rockhouse said a range of tests returned negative results, but after her GP consulted a gynaecologist she was sent for an ultrasound which revealed the Essure device had moved further into her uterus and become embedded there.

Some weeks ago she had a full hysterectomy - the safest option to make sure none of the device remained inside her - but it too involved yet another abdominal incision.

"So my stomach has been chopped open five times now, each time worse than the first.

"It's taken a massive toll on me, physically, mentally, financially, having to take that time off.

"My kids just want their mum back and my husband would just like his wife back."

She wanted Bayer, the company responsible for the device, to reach out to every woman implanted with one to check if they were experiencing problems and assist with removal.

Dozens of Australian women have signed up to take a class action against the pharmaceutical giant and Ms Rockhouse was investigating whether she could join.

However, Wellington lawyer John Miller, who specialises in compensation cases, said the ACC scheme would prevent women from suing for damages in New Zealand.

It would be possible for New Zealand women to join the Australian class action, but the lawyers involved were often reluctant to allow that to happen, he said.

"Because when they add them to the claim the overseas defendants start arguing, saying the New Zealand women should be separated out [because of the ACC scheme].

"So it takes the Aussie lawyers into a legal fight they could do without for a limited number of New Zealand women."

Women who had been harmed by the device would be entitled to benefits such as weekly compensation while off work, or a lump sum, if they were permanently incapacitated, Mr Miller said.

Sue Claridge from the Auckland Women's Health Council said it joined a long line of medical devices such as surgical mesh which have been introduced without as much scrutiny as medicines.

In a statement Bayer said patient safety was important.

"Bayer continuously reviews the safety profile of its products worldwide and collaborates with health and regulatory authorities, sharing all relevant information."

It would not release how many Essure devices were sold in New Zealand, citing commercial sensitivity.

Women seeking support from others in the same situation can access Essure Victims Australia/New Zealand on Facebook.