The son of rugby legend George Nepia is one of a number of New Zealand servicemen whose remains will be returned to this country next week. 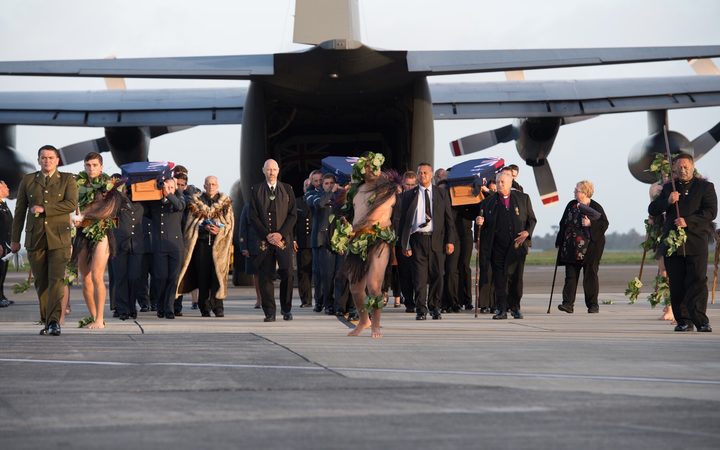 The remains of three servicemen are handed over to families after being returned from Suva and Pago Pago in an earlier ceremony in May. Photo: Supplied / NZDF

Twenty-eight defence force personnel, who died while serving in Malaysia, Singapore and Vietnam and were buried overseas have been exhumed and will be returned to their families at a ramp ceremony at Auckland Airport on Tuesday, 21 August.

The remains of a three-month old boy, who died of an illness in Malaysia, while his father served there in 1963, will also be returned.

A defence force team, including bioarchaeologists and forensic anthropologists from New Zealand universities and New Zealand Defence Force odontologists have been working in Malaysia and Singapore identifying the remains.

Until now, the 28 servicemen and the child have been resting in three cemeteries in Malaysia, Terendak Military Cemetery, Taiping Christian Cemetery and Cheras War Cemetery and one in Singapore, Kranji War Cemetery.

The repatriation project, Te Auraki (The Return) involves bringing home personnel and dependants buried overseas after 1 January 1955 through to 1971 following a change in government policy.

The first to return were three men who served in the Pacific. They were returned home in May.

Te Auraki project manager group captain Carl Nixon said the NZDF was committed to making the project as dignified and respectful as possible for families of those being repatriated.

"This project is about rectifying the inequalities and inconsistencies of the past, so we will be treating everyone the same, regardless of wealth, rank or cause of death."

Between 1899 and 1955 service personnel who died overseas had to be buried near where they died. Between 1955 and 1971 they could be brought home but families had to pay. After 1971, repatriation was at the taxpayers expense.

The 28 servicemen and one child will be flown from Malaysia on an chartered Air New Zealand Boeing 787 following a farewell ceremony at Kuala Lumpur international Airport on Monday, 20 August.

'He was the life of the party'

Sergeant George Nepia was 24 when he died as a result of an accident in 1954.

He was the oldest son of rugby icon George Nepia, who was one of the Invincibles that toured Britain in 1924-25.

Sergeant Nepia's nephew, also called George said the whānau tried many times over the years to get his uncle home, but had no luck.

"Something happened in the defence force and they realised that this is wrong and we should have brought these men back and you know, better late than never."

"I can't explain how hard it has been on our family."

George Nepia said his uncle, who he never met, has been described as a real character.

"He was the life of the party and the family and apparently the heir apparent in terms of rugby and the All Blacks and all that sort of thing. He was of that calibre of a player as well."

Mr Nepia said the fact his uncle was coming home after many years was some consolation for the family.

'I just cried when we left him there'

Sergeant Issac King was 29 when he died from a heart condition while on a route march in 1964.

Before going to Malaysia, he had served in Korea.

His widow, Polly King had two young children at the time and one more on the way.

"The hardest thing for me was when he was lying there and buried there and we had to come home. That was terribly hard for my children and I and my brother-in-law. We got on the train and I just cried when we left him there and then we flew back from Singapore." 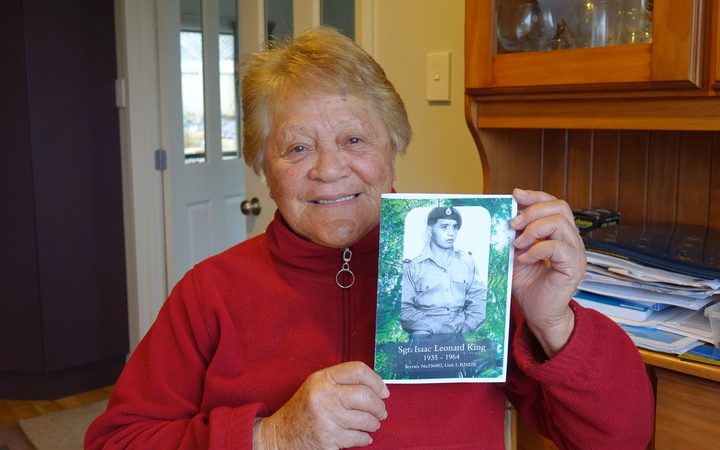 There was never any option to take her husband home to New Zealand, Mrs King said.

"I don't know whether I was annoyed or not but it was not for me to say. He signed his life with the Army so what do you do?"

She said she could not have done anything: "He signed his papers so I saw that and to me it happened but it would have been nice if they had brought him home."

Mrs King said it took some time for her to be able to accept her husband's death.

She vividly remembered an Army officer coming to her home to tell her what had happened.

When he left home that morning he said goodbye and that he was off on a route march.

On his return, Isaac King will will rest at the family home in Pukekohe for three days before a funeral service at the local RSA.

She is hoping her three children, who never knew their dad will be able to reconnect with him.

"There will be a lot of weeping and that but I am so happy for my children."

'We can return our beloved one' 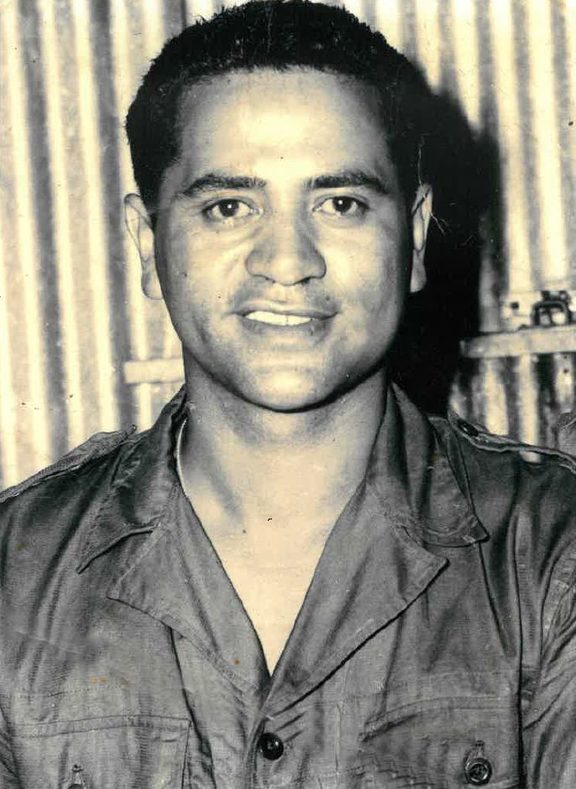 Lance Corporal Percy Brown Iwihora was shot and killed by a sniper while on patrol in the jungle fighting in what was called the Malayan Emergency, an attempt by the Malayan Communist Party to overthrow the British colonial administration of Malaya.

His nephew, Vincent Hapi and niece Girlie Iwihora have been fully involved in the campaign to repatriate all of those who died serving overseas between 1955 and 1971.

They said the news that Uncle Percy was finally returning home was amazing.

"We were elated, we were relieved and we were also sharing our tears of joy, tears of love and tears of grief."

"At long last celebrating but also at long last we can return our beloved one."

Mr Hapi said more effort should have been made at the time to repatriate the men, so they could be laid to rest at home.

"We can recall the Maori Battalion when they returned from the Second World War there was not so much a celebration it was about grieving for those who passed away that is what it is all about, to grieve so they can rest in peace."

"As the oath says, we will never forget them, we will always remember them, lest we forget." 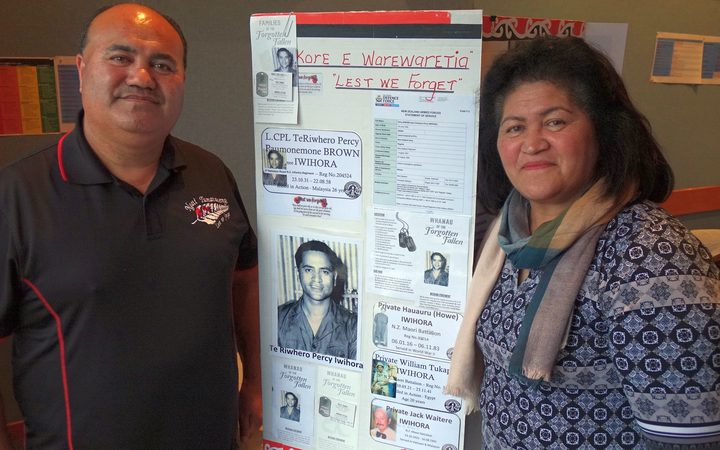 Girlie Iwihora said the family had a responsibility to be part of the campaign to have her uncle and others buried overseas brought home.

"This was not about ourselves, this was about the responsibility of doing our duty to our parent to get his sibling home."

Lance Corporal Percy Brown Iwihora will be buried on Taupiri Mountain in Waikato.

Staff Sergeant Graham Grigg, known to his army mates as Dick, died when a bomb exploded next to the hotel he was staying in Saigon, Vietnam, at 5.30 in the morning on 6 December 1965.

His sister-in-law, Veronica Grigg said her father-in-law was deeply shocked because he had lost another son in a sudden death only three weeks earlier.

She said the family just accepted Graham was buried overseas. In his case - at the Terendak Military Cemetery in Malaysia.

"It just seemed final that Graham was dead and buried in Malaysia and that was it."

Graham Grigg will be finally laid to rest in Paraparaumu.

After the repatriation is completed next week, four more servicemen, two buried in South Korea and two in the United Kingdom will be returned home later this year.

Te Auraki will then be complete.