Gabriel Yad-Elohim, accused of stomping a pensioner to death, was likely hearing voices when he carried out the killing and in his subsequent interview with the police, a psychiatrist says. 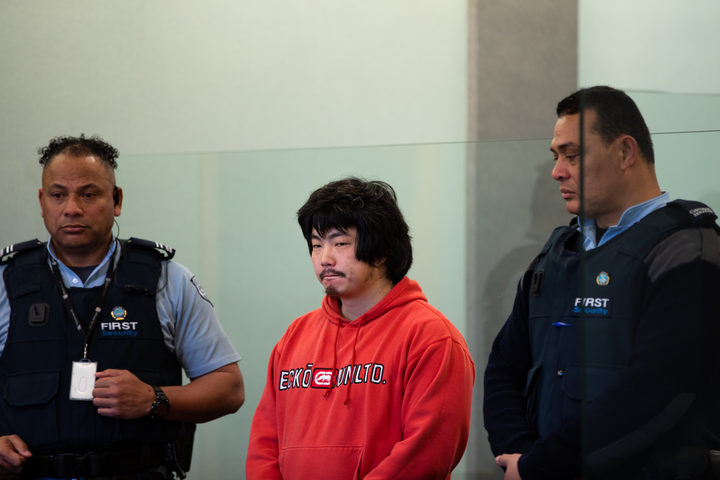 Gabriel Yad-Elohim entered a plea of not guilty to the charge of murder in the High Court in Auckland today. Photo: RNZ / Dan Cook

Gabriel Yad-Elohim is on trial at the High Court in Auckland, where he's denied murdering Michael Mulholland on grounds of insanity.

In court today the Crown said Mr Yad-Elohim was trying to get drugs but got ripped off in the deal and stomped and struck Mr Mulholland 91 times in September last year.

Mr Yad-Elohim's lawyers said he was suffering a disease of the mind, had only been discharged from a mental health ward for three days, and had no way of telling right from wrong at the time.

Dr James Cavney told the court he had watched security camera footage of the killing and noticed Mr Yad-Elohim nodding when no one else was present.

Mr Yad-Elohim also pulled out cigarettes and threw them at Mr Mulholland's body on the ground part way through the assault. He later left the scene only to return a short time later and continue the assault.

He said he believed that showed Mr Yad-Elohim was hearing voices.

Dr Cavney said he also believed Mr Yad-Elohim thought he was carrying out divine retribution when he killed Mr Mulholland.

There was also a period at the end of the police interview when he was alone in the room and appeared to be talking to Mr Mulholland.

Dr Cavney said no one knows the extent of Mr Yad-Elohim's psychosis, but he believed the psychiatrists had only seen the tip of the iceberg so far - a big iceberg.

But a psychiatrist for the Crown, Peter Dean, told the court he believed Mr Yad-Elohim was acting out of anger, not because he was mentally ill.

Dr Dean said while Mr Yad-Elohim had a history of mental illness and was having deluded thoughts, he felt betrayed and angry when he was ripped off.

Dr Dean said others might have felt the same.