The newly-crowned Super Rugby champions will begin their own crusade through the Garden City today. 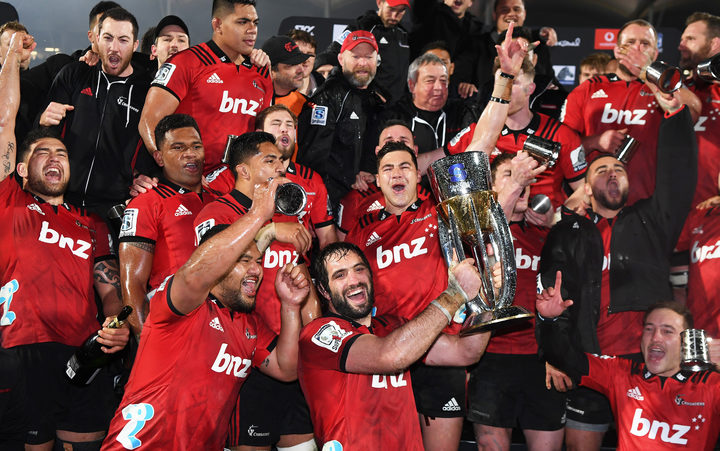 A parade is being held in central Christchurch, after the Crusaders crushed the Lions to claim their second successive title on Saturday night.

The Crusaders have always had a cult following and nearly 20,000 fans were at AMI Stadium when they claimed yet another title.

Crusaders fan Sophie Stammers said she has supported the red and blacks all her life.

"I think it's going to mean the world to [Cantabrians]. Look at the turnout - full seats just about everywhere. Everyone's stoked for the team. We're just natural born rugby supporters here in Christchurch.

"They need to get that [new stadium] put up. We need more games here in Christchurch, definitely."

Another in attendance was Ravi Sharma, who said he had never experienced a sports match quite like this.

"My first ever game in the finals at AMI Stadium. Never follow rugby, mostly, but this year I've been following [the] Crusaders a bit. This is just amazing. I've been to three games - quarterfinal, semi-final and the final."

It was a different story for Lions fans, especially those who had made the 30-hour journey from Johannesburg.

Supporter Bongani Ngubo winged it to Christchurch because he wanted to see his team win in enemy territory.

He was gutted about the result, but is optimistic the Lions will strike back.

"Beyond words - cannot explain. Third time in a row [that the Lions have lost a Super Rugby final] and we've come up with nothing. It's nerves. It's nerves, mostly. If you [saw] the mistake that was done by [Lions first-five-eighth Elton Jantjies] - that's a school boy mistake, that's nerves," he said.

Additionally, Lions fan Vincent Heyns was struggling to find the positives following another loss in the finals.

He said playing a match in New Zealand is one of the biggest challenges in world rugby.

The Crusaders have won nine titles in the last 22 years of Super Rugby.

Something that hasn't been lost on captain, Sam Whitelock, who knows how much effort goes into winning a championship.

"I spent so long trying to win [a championship], and then to finally win one. I knew how hard it was to [win a championship]. Never took anything for granted, but to come here at home and do it again is very, very special."

Another factor had been their coach, Scott Robertson, who was as laid-back as they come, he said.

He said they learnt from some of the best that you can't take grand finals for granted.

"You gotta live the moment - you don't know when it's going to come again. It was pretty special, especially to do it [in Christchurch]. It's 10 years [since the Crusaders last hosted a home final].

"We had some great messages through the week. We had [former Crusaders coach] Robbie Deans [and] a lot of the older players coming in and saying 'cherish it 'cause you don't know when it's going to happen again.' 'Take the opportunity' and we did."

Now, Crusaders fans will have the opportunity to bask in their rugby side's success.

The parade is scheduled to get under way on The Terrace, near the Bridge of Remembrance from midday.