Two tragedies have brought two groups of students from opposite sides of the world together for a special tree planting in Christchurch. 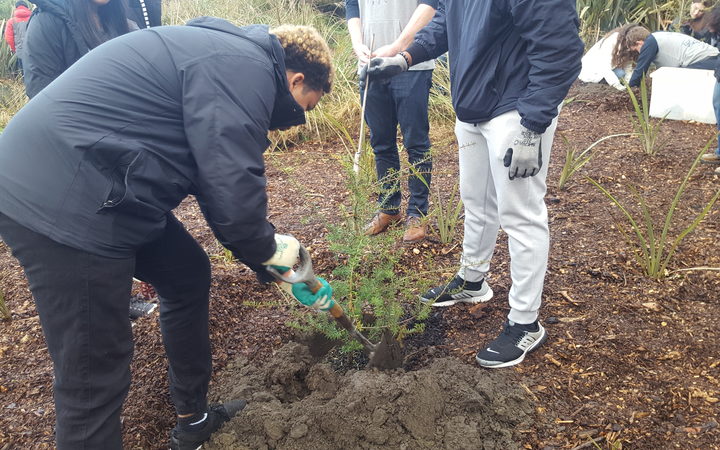 Twenty-eight students from Marjory Stoneman Douglas High School in Florida are spending the week with the Student Volunteer Army, established after the 2011 Christchurch earthquake.

The students survived a deadly shooting in February, which killed 17 people and injured dozens of others.

At the Halswell Quarry Park Conservation Area in Christchurch yesterday the high school students planted native trees to symbolise the connection between their experience in February and the Canterbury earthquakes seven years earlier.

Drew Schwartz, 17, from Florida recalled the emotion of February's shooting.

"It was a terrible day that ... we'll always remember the people that we lost that day ... it was a horrific day but we turned it into something good and we're trying to not forget it but look past it and see how we can all move on," he said.

He said as an 11-year-old he'd been aware of the quake hitting Christchurch.

"I knew that tragedy struck and I knew that a group of people helped the community get back together and to me that inspired me as a young boy," he said.

Teacher Danielle Driscoll said the trees would grow and flourish and prosper, just as the students would.

"They are going to triumph out of tragedy," she said.

Volunteer army spokesperson Emma Pratt said both groups could learn a lot from each other about moving on after a tragedy.

"Use those emotions ... use those feelings to empower us and to make the change in the community ... and so I think that's what links us mostly," she said.

The students will hear from New Zealand businesses, government, university, and non-profit sectors while in the country, as well as taking a trip to Government House to meet Governor-General Dame Patsy Reddy.