The forestry industry risks being caught in its own logjam over the safety of its workers. 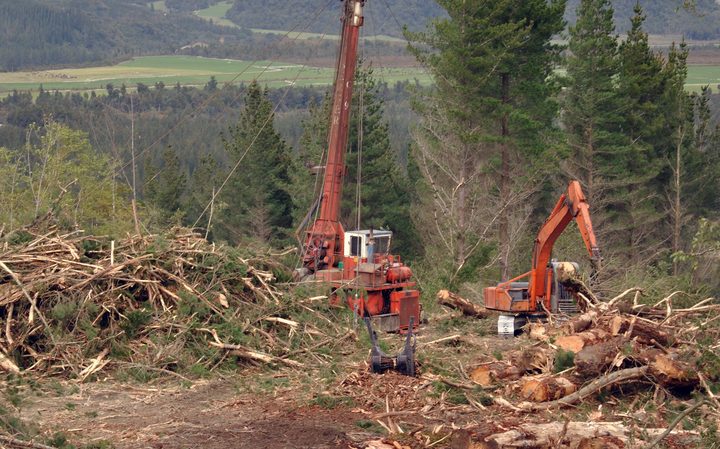 Some forest owners say there is a legal obligation to replant on steep slopes after felling (stock image). Photo: 123RF

The state agency WorkSafe said cash crop trees like radiata pine might have to be omitted from steep hillsides, where cutting them down could be dangerous for the workers who did it.

However, forest owners said some had a legal obligation to replant pine on steep slopes after felling a current crop.

Others could not afford to leave their land bare.

The debate began when a forest worker was killed earlier this week in a logging accident in hill country near Nelson.

The 31-year-old's death followed another near Bulls last week, and others in Northland and Marlborough earlier this year.

WorkSafe, forest companies and trade unions have been working for years to try to prevent deaths like these.

After the Nelson death, WorkSafe chief executive Nicole Rosie told Morning Report yesterday that many of the trees being felled now were planted on steep hillsides 20 to 30 years ago.

"Some of the solutions to the health and safety problems were created 20 or more years ago and will need to be solved by what we do now."

She said New Zealand needed to start thinking about leaving these slopes bare after harvesting, to avoid a new set of safety problems when the next crop was cut down in future.

Other foresters would incur a huge financial penalty under climate change legislation if they did not replant after harvesting.

Mr Weir said these large costs would be incurred automatically by owners of pre-1990 forests and by a great many post-1990 forests.

Robert Reid, a trade union leader who has long been active in forest safety, agreed with WorkSafe that trees should not re-planted in dangerous locations.

"I have made the point on various committees that the one-billion-tree programme needs to be done using the information we have," Mr Reid said.

"Perhaps in some areas, it should be natives planted permanently rather than plantation forests, where there could be an extra danger when it comes time for felling."

However, that argument was a worry for Mr Weir.

He said compelling landowners to plant native trees would produce permanent stretches of bush, the size of national parks, done at the expense of the private landowner, who would not get a return from an initial investment.

Mr Weir has written to the Ministry for Primary Industries seeking a reforestation exemption for trees planted on steep slopes.

It would be similar to a reforestation exemption for landowners who pull out wilding pines, he said.