More than 100 people have turned out in Auckland to a free-speech rally calling for two controversial Canadian speakers to be allowed to address a meeting in the city. 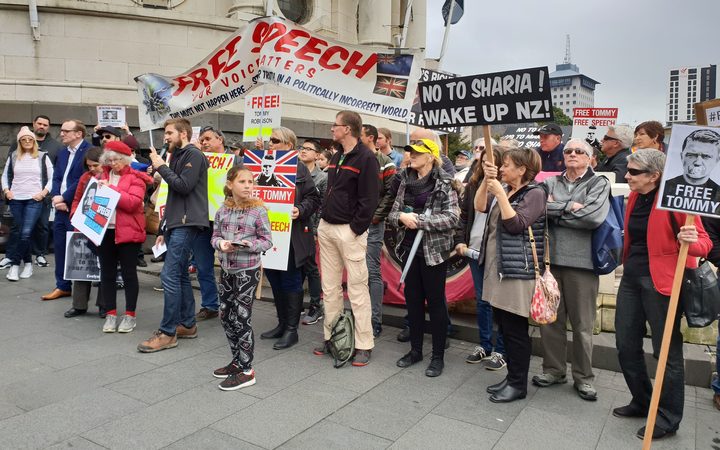 Mr Goff has said that Auckland Council venues should not be used to "stir up ethnic or religious tensions".

Both Ms Southern and Mr Molyneux are known for their polarising views on topics including feminism, gender, immigration and Islam.

Initially there were a few dozen people but more joined the crowd on Queen Street next to the Town Hall in central Auckland as the event went on.

New Conservative Deputy Leader Elliot Ikilei said free speech was a right and Phil Goff did not control what he thought.

"Don't you dare tell me what I am allowed to hear and what I'm allowed to think," he said.

"I'll make my own decisions."

The organiser of the rally, Dieuwe de Boer, said he was really looking forward to the talk by Ms Southern and Mr Molyneux.

He said he organised the rally because he thought there would be a lot of support to have the council venue for the talk restored.

"[We don't want] to end up with a society where only one side with one particular set of views can be talked about," he said.

Stephen Berry from Act also spoke at the event in support of free speech.

A few protestors of the event who turned up to the rally said the event was concerning.

Joe Carolan from Unite Union said the people there were pushing their views under the guise of free speech.

"We have to take a stand immediately ... if this movement persists then ... [we] should be here to counter-protest," he said.

The Free Speech Coalition has raised $50,000 to take legal action against Auckland Council and to try and overturn the ban.

Rallies were also organised in Wellington and Christchurch today.